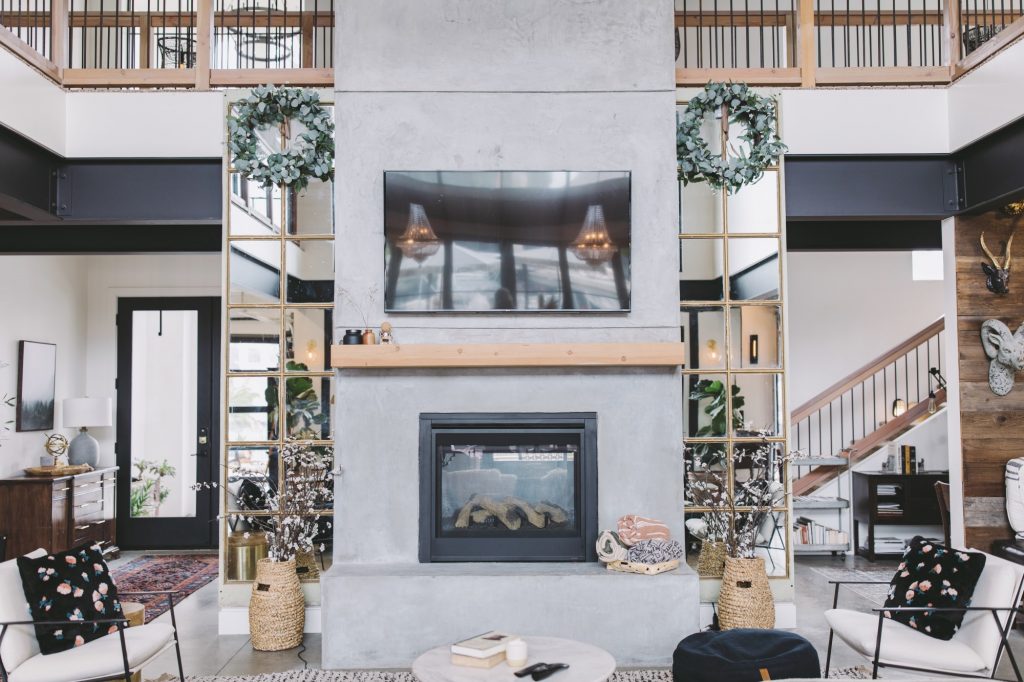 This family built an entire home around the “special” pieces they found at Olde Good Things. The storefront doors that open into the entryway courtyard and a set of antique mirrors that flank the fireplace and mantle set the tone for a Visalia, California home built on a creative budget plus persistence.

Chelsea and Chris Cumiford were born and raised in the Central Valley and wanted to return after college to raise children there. They purchased a building lot in 2014. It took four years to begin the actual build process because the couple decided to pay off graduate school loans and the loans on the lot before beginning the custom home. 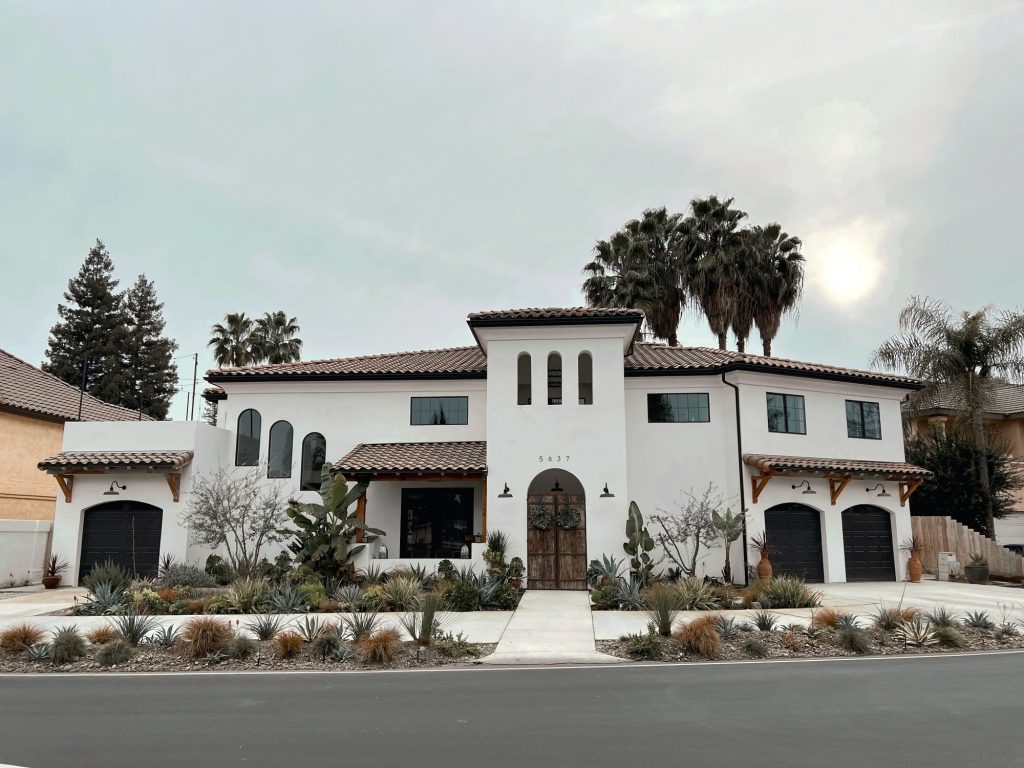 Chris Cumiford works as a high school science teacher and college professor. Chelsea works part-time as a school psychologist and stays at home to spend time with the children, 5-year-old Rogue, and 2-year-old Canon, a few days each week. 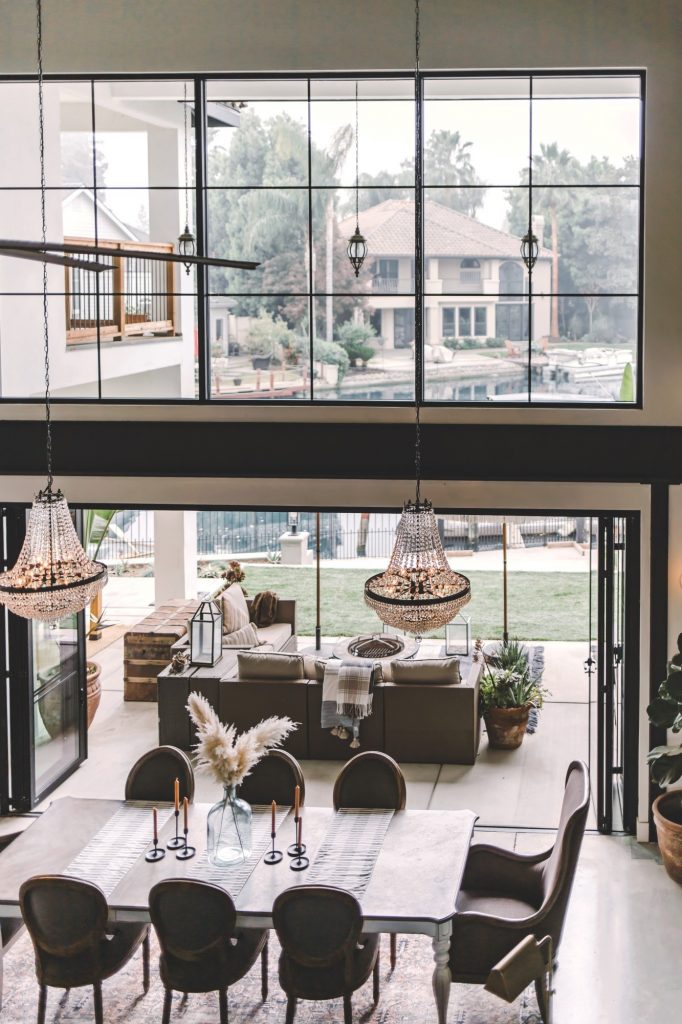 Construction of the home began in 2018. The couple wanted to build a custom home that reflected the family and their style, Chelsea says. They were looking for an open interior with spaces that retained their character.

“…having to adhere to a tight budget can actually force you to make creative decisions that you might not have made otherwise,”  she adds. 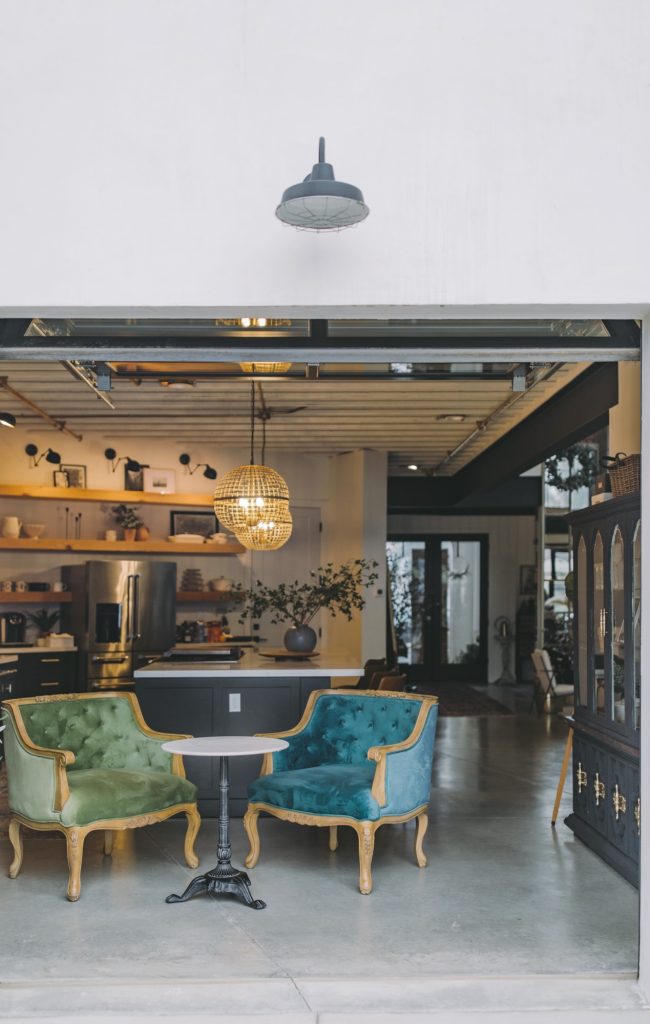 The creativity was reflected in exposed concrete floors, exposed joists in bar and kitchen areas, and railings composed of rebar metal spindles. Vinyl doors replaced the use of steel. Budgeting turned the home design into the custom industrial glam the couple was hoping for. 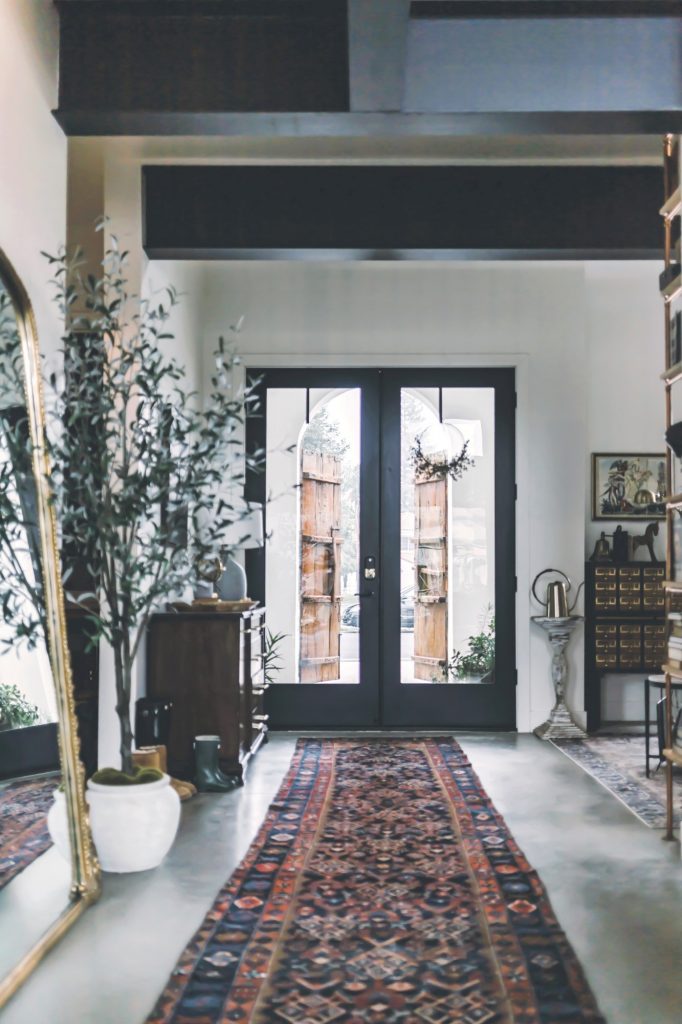 Salvaged materials also fit nicely into the overall budget and design scheme. The OGT storefront doors were painted black, with hardware added to match the French doors on the home. Hundred-year-old wooden doors were purchased for the front of the home. 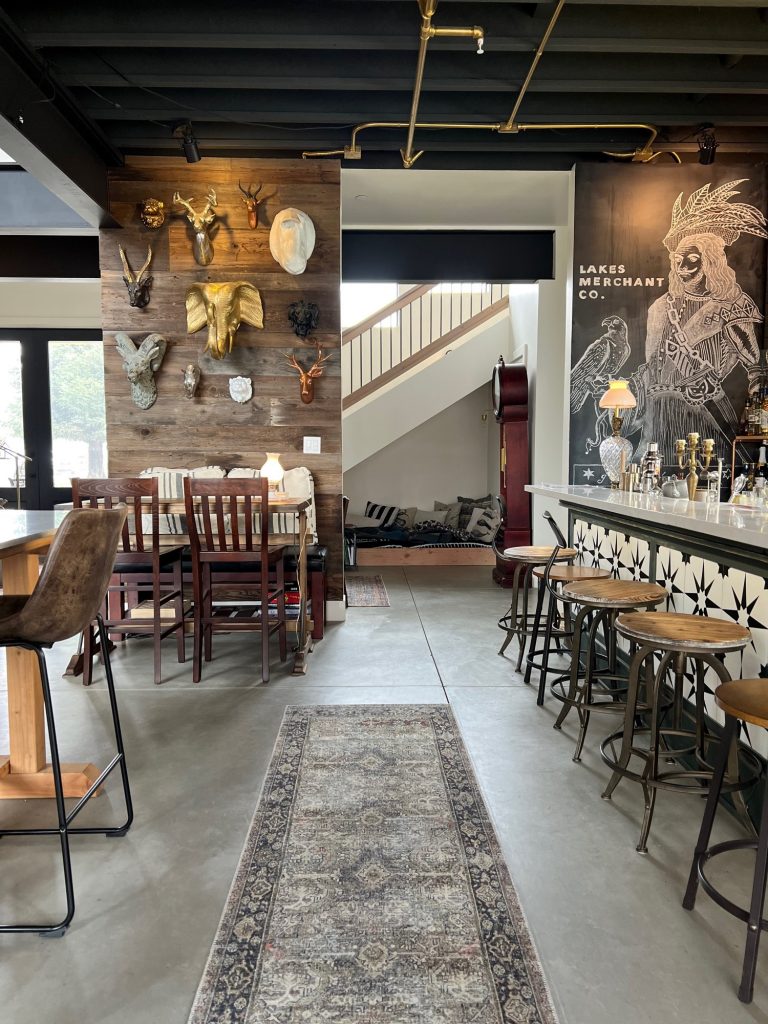 The bar is designed from a 1950s-era department store counter acquired from a friend. The couple purchased a local antique mantle for the library side of the double-sided fireplace. 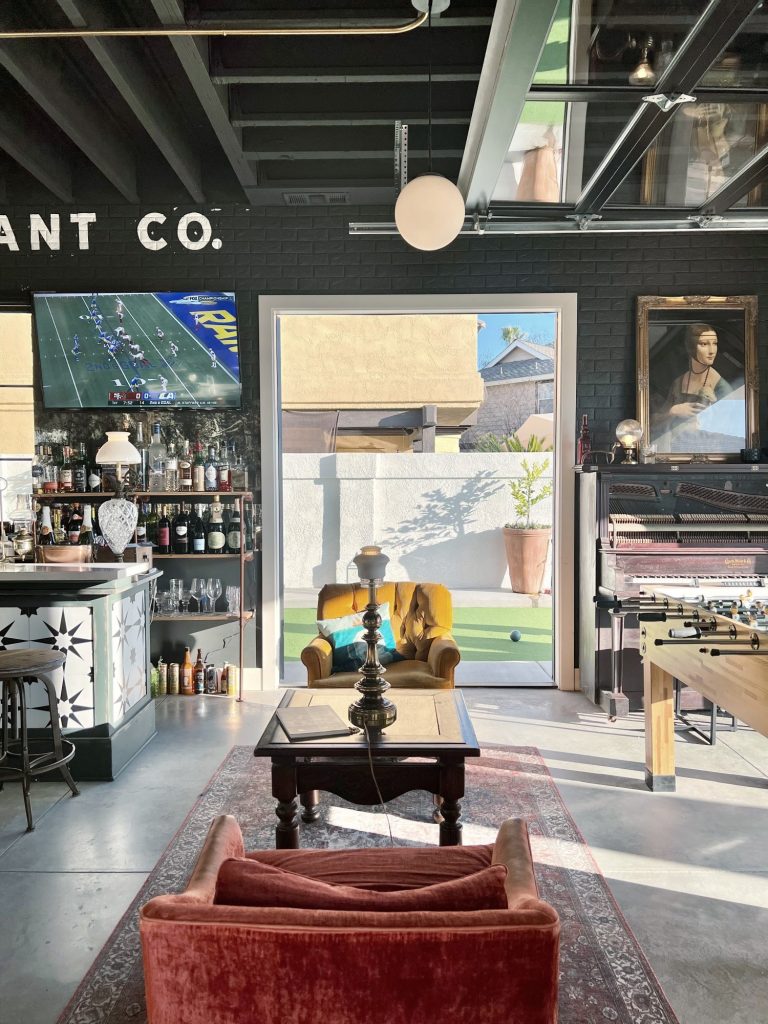 It’s a vision that gets built on bit by bit. Future projects for the home vision include a library book wall with an antique ladder, pantry renovation, a finished powder bathroom, and a dock that extends the backyard space out into the water, Chelsea says. Other projects include an above-ground spa for the backyard, and adding finishing touches to the kid’s bedrooms and play loft. 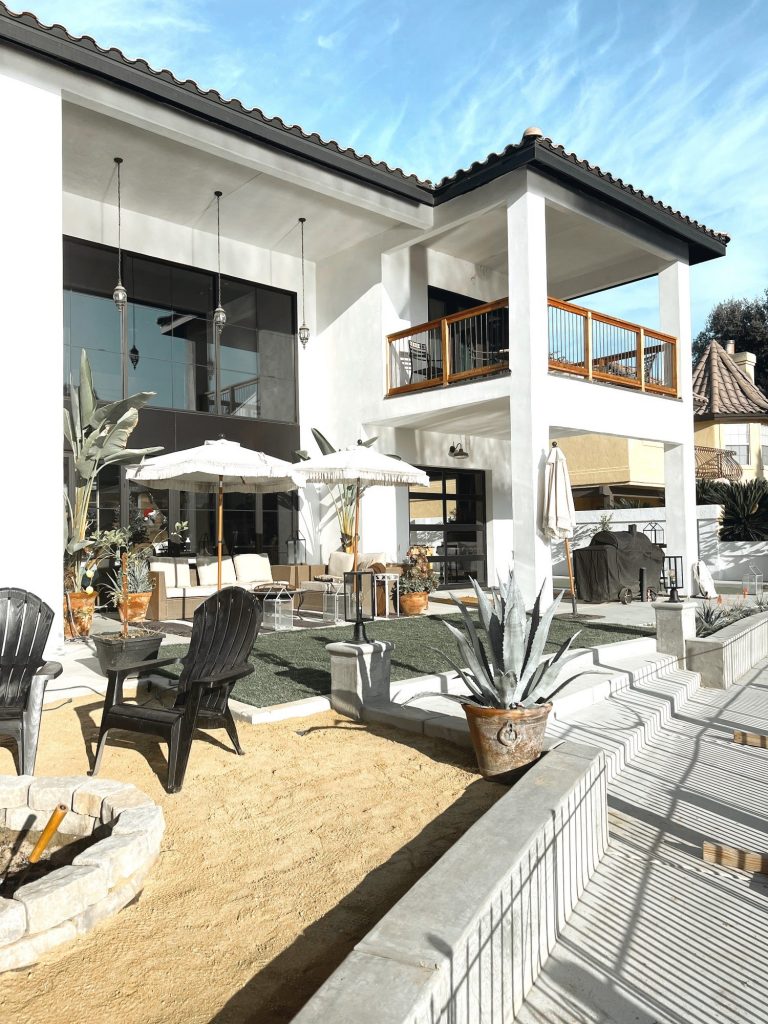 “The home was brought together by elements of modern industrial design, with elements of historic time periods that made sense.,” Chelsea explains. ”The whole house is really this combination of modern, and historic elements of design combined. The outside of the house is a Mediterranean elevation with major Spanish and Italian design elements. There is a major nod to California’s historic missions with the Western White exterior, large tower entry, arched doorways and windows, tiled roof, and large wooden door. 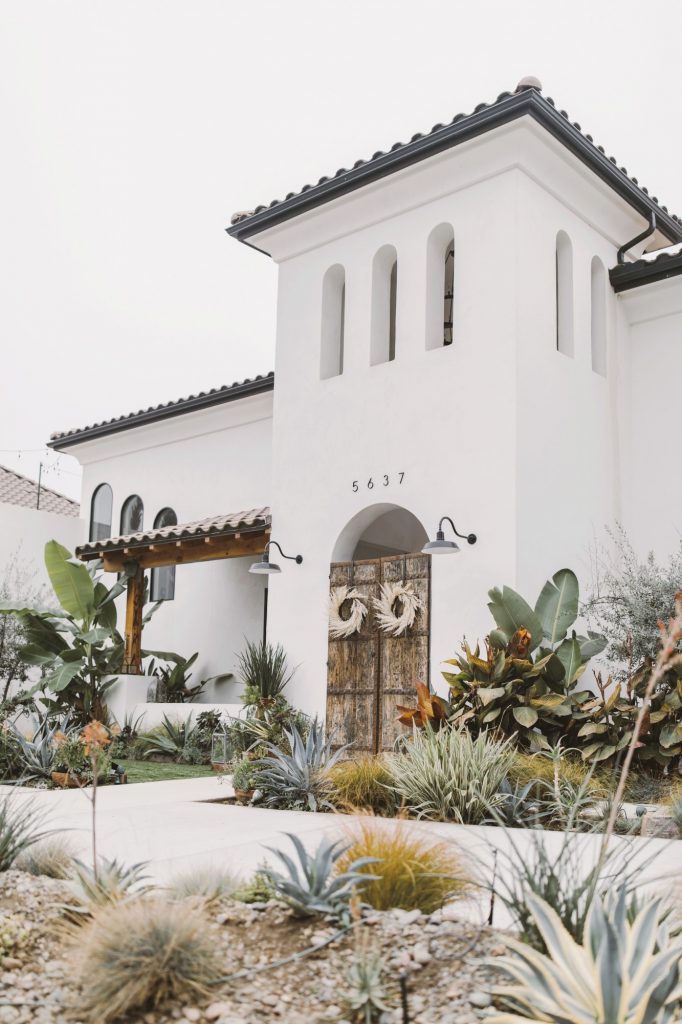 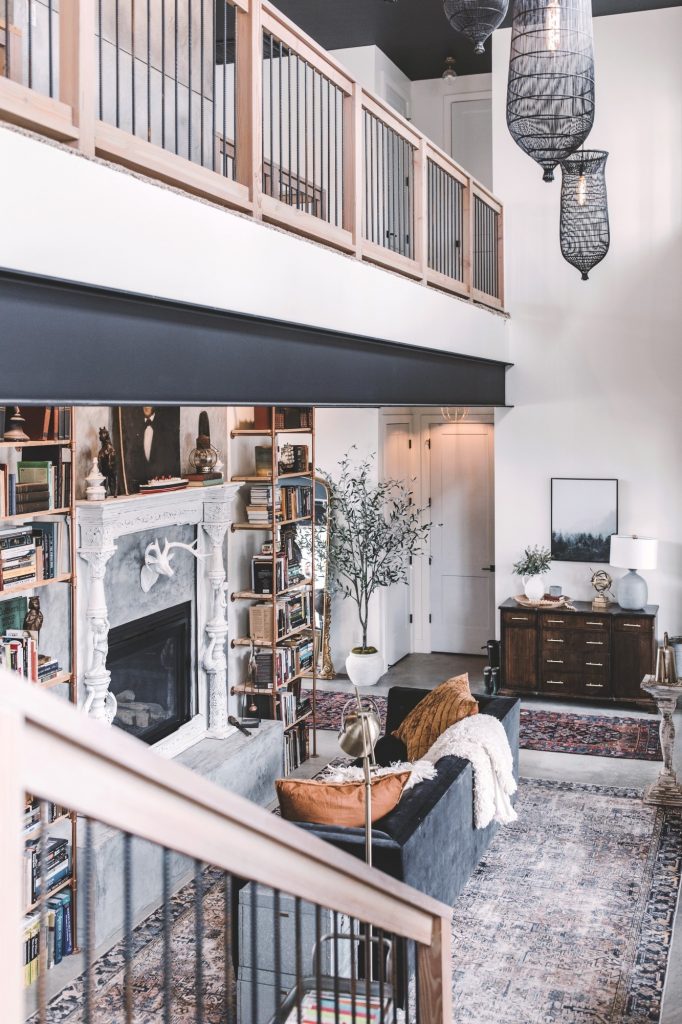 The process inspired Chelsea Cumiford to chronicle this part of the family’s journey on her Instagram, which in turn inspired a decision to work with her own design clients. 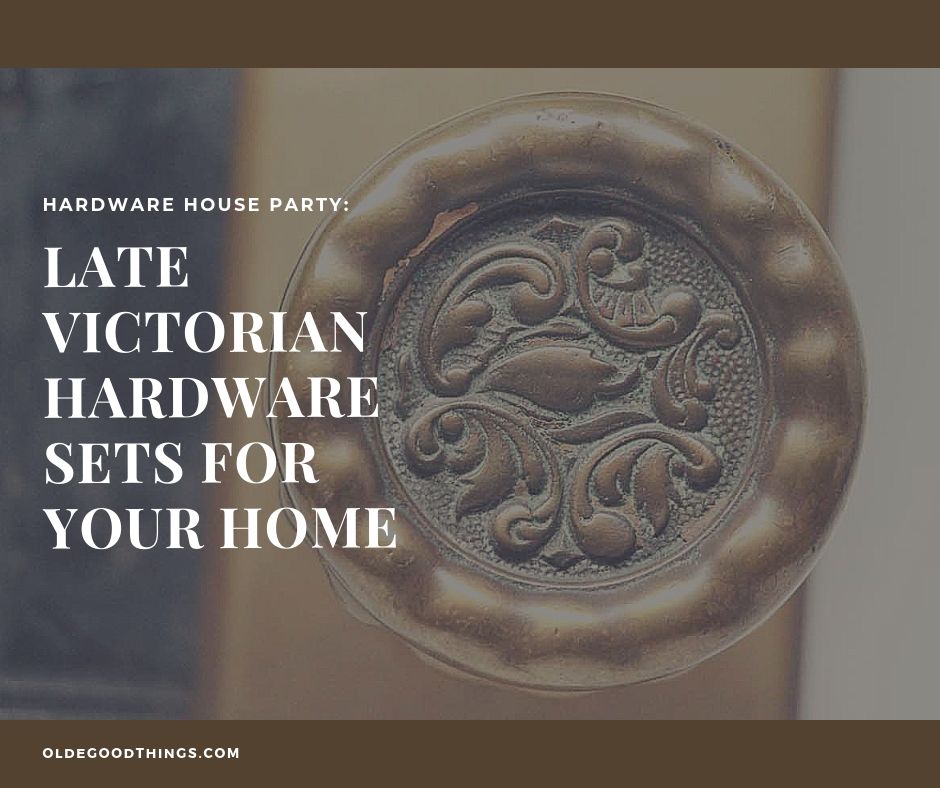 As a fashionable Victorian, one way to demonstrate your good taste and wealth was to decorate your doors with ornate, eye-catching hardware. Homeowners would purchase matching sets in elaborate styles from manufacturers like Adams & Westlake, Russell & Erwin, Corbin, or Sargent.  The sets would include dramatic entry knobs for the front door, matching smaller knobs for the interior first floor doors, and complementary backplates. (Second floor doors, less visible to visiting friends and neighbors, often featured simpler, less expensive knobs in white or black porcelain).

Whether you are restoring a Victorian house or just adding some antique flair to a modern home, you can recreate this coordinated look with our Olde Good Things hardware inventory. While some of our other antique doorknobs are only available in single or small quantities, we have extensive stock in these classic styles. Put an order in through our web store, or contact us for assistance assembling a house set. 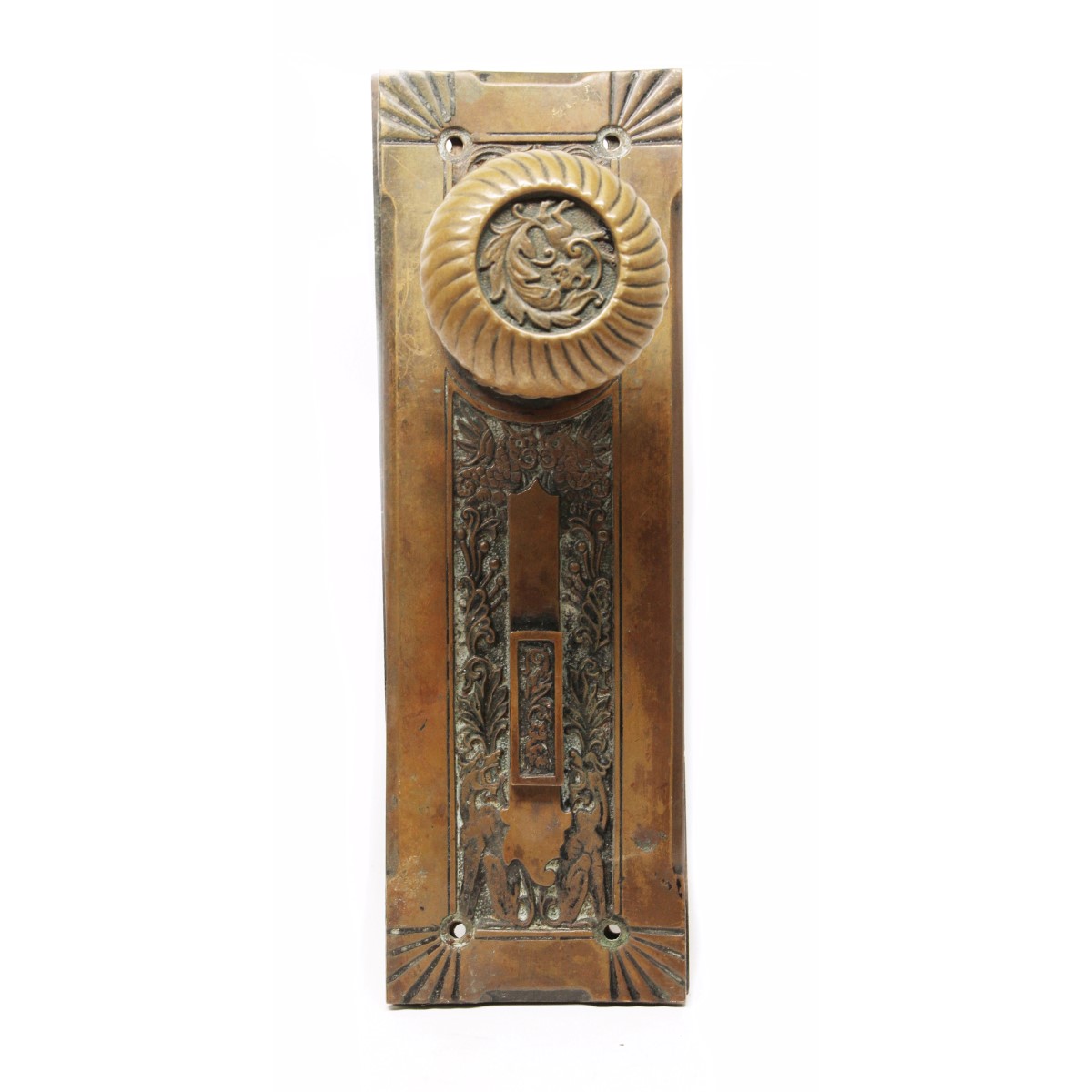 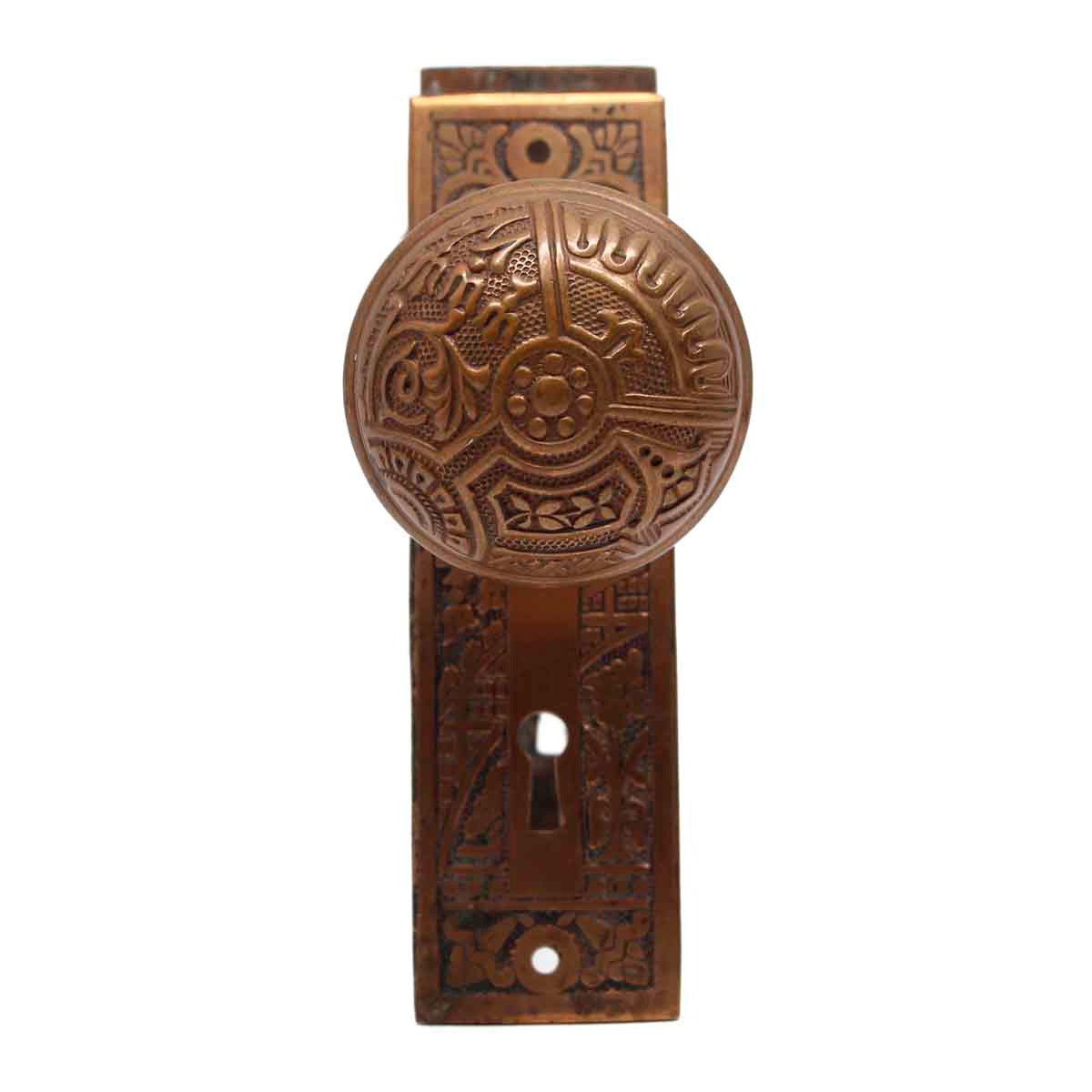 Corbin released this vernacular design series a few years later, ca. 1895 (and it was still included in their 1905 catalog). There are two different types of Ceylon knobs, both in wrought bronze – a three-fold design and an arched design, both asymmetrical. Our Ceylon inventory includes both knob designs as well as accompanying backplates and door sets. 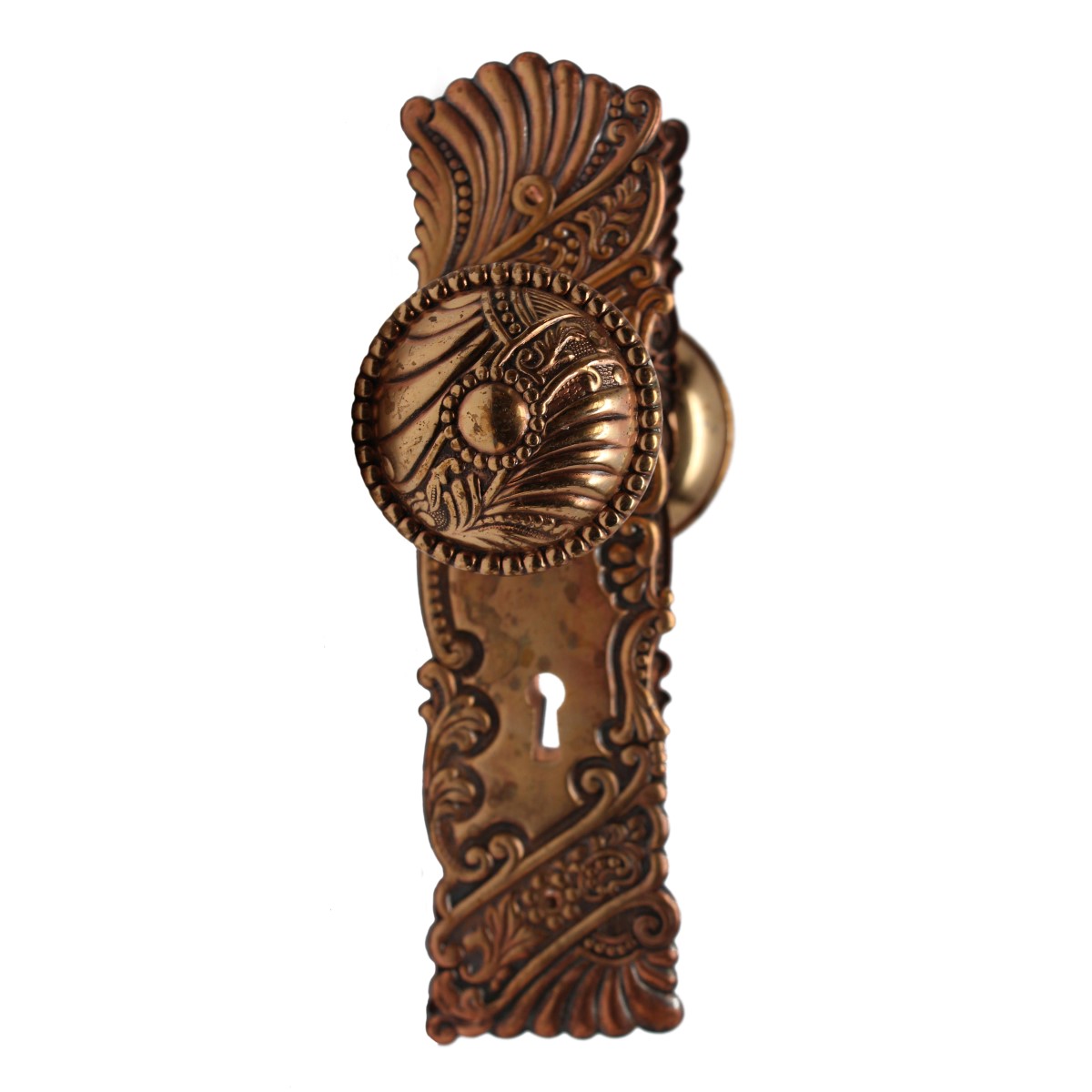 This is another vernacular series by Corbin, released in ca. 1895 (and also included in their 1905 catalog). Roanoke wrought bronze knobs feature a central dome framed by feather-like swirls, but the style is most recognizable in its dramatic, whirling backplates. Our Roanoke collection includes knobs, backplates, door sets, sash lifts, and pocket door plates. 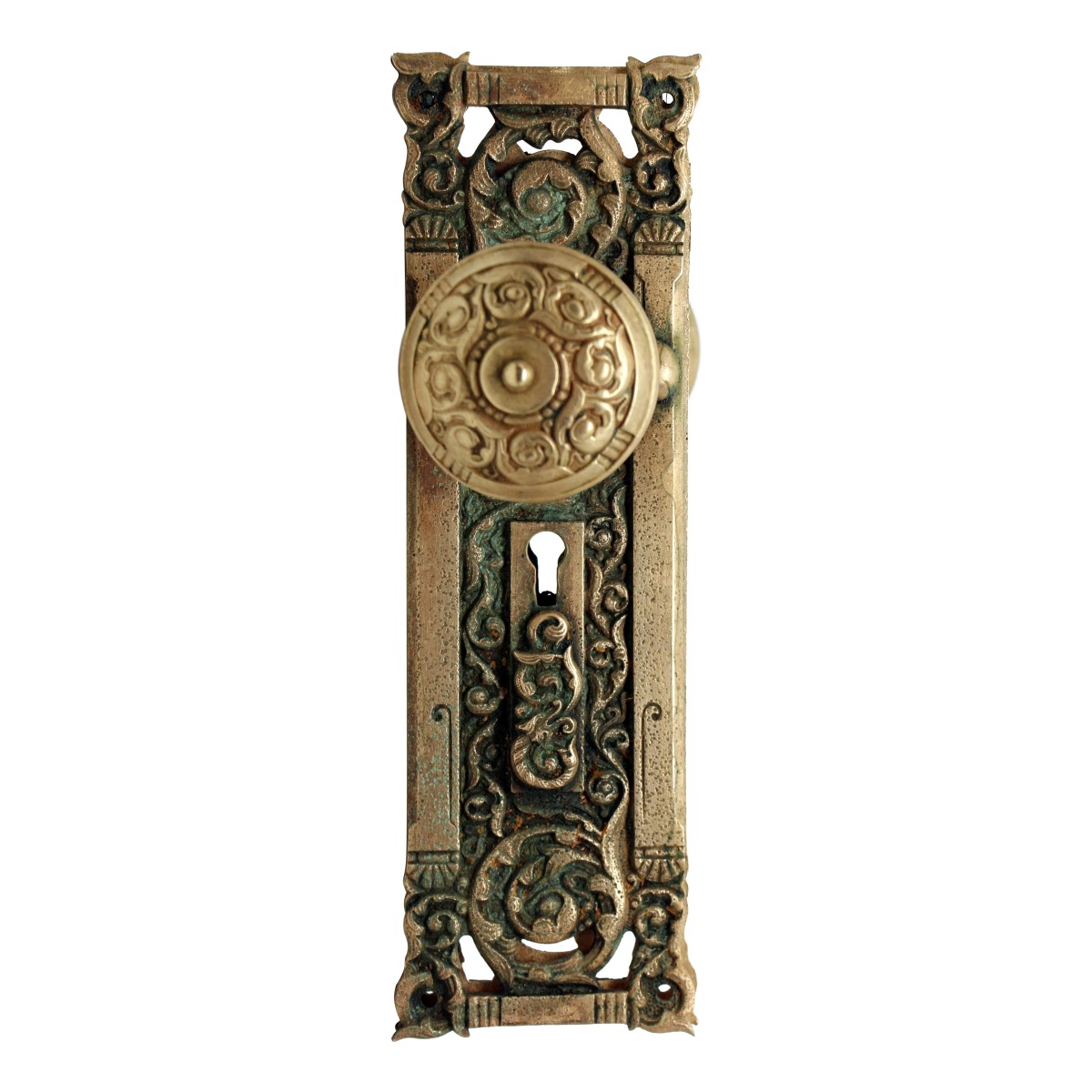 Reading manufactured this Italian Renaissance-inspired series beginning in 1897. Two types of knobs are available: a horizontal design with a subtle appearance by a fox, and an eight-fold symmetric design with foliage. Our Columbian inventory includes knobs, backplates, and door sets. 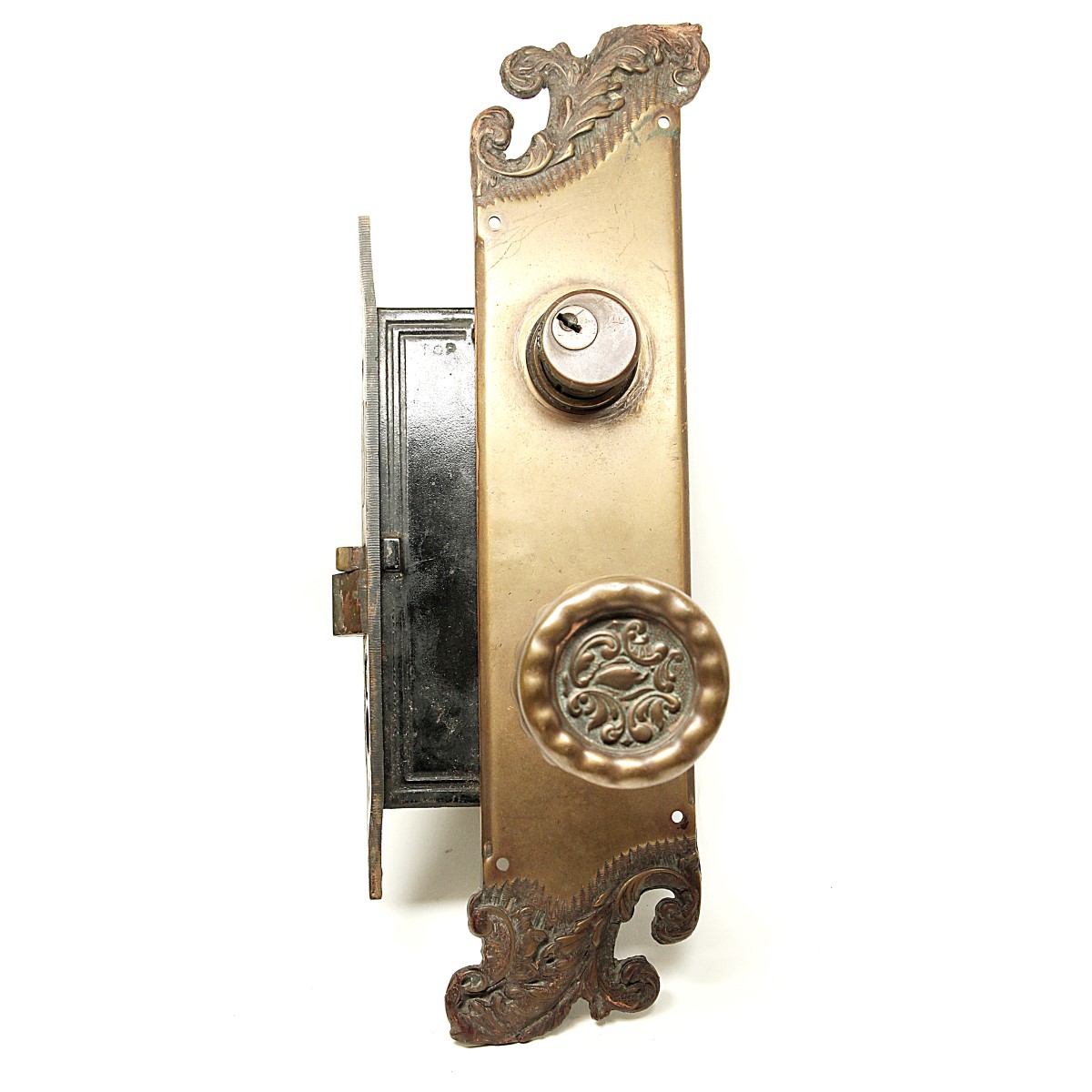 Also known as Eulalia, this Rococo style was produced by Reading beginning in 1898. These knobs have a central floral design and a textured surround. Our Americus collection includes knobs, backplates, door sets, and an ornate door pull.