Stained glass dates back to at least the Roman Empire when craftsmen peddled wares including stained glass. The history of stained glass takes on legendary elements as the mixture of craftsmanship, science, art, and religion all blend into a divine tale of trial and error. It is metallic oxides that influence the creation of many hues during the manufacturing of stained glass. 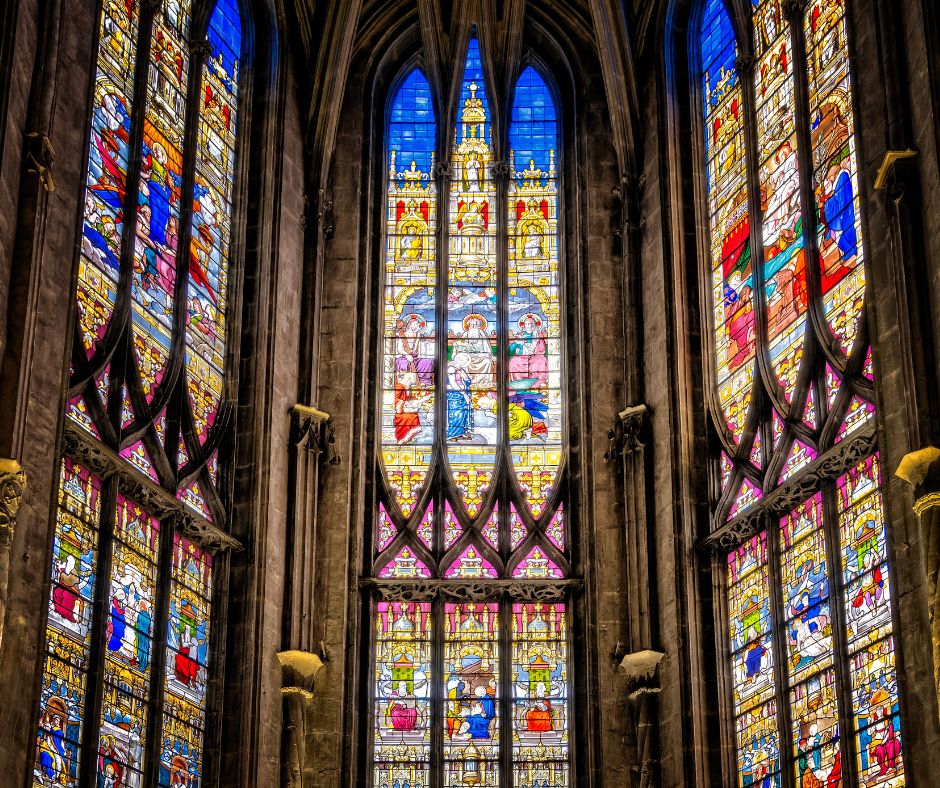 The Lycurgus Cup, one of the most mysterious and famous relics of stained glass, seems to have formed by accident during its making. The cup is composed of dichroic glass, which changes color depending on the light. Lit from inside, the cup glows red, while outside light reveals an opaque green-colored hue. There are no other existing examples of such pieces from the Roman period. Scientists say it is the development of nanoparticles in the glass that is responsible for the drastic color change, and that a lack of control of the coloring process caused its development. Today it is housed in the British Museum.

Stained glass windows were adopted into the atmosphere of medieval monasteries in the 7th century. Soon they could be found in cathedrals across Europe. The original designs were small, simple, and Romanesque. But by the 12th century, Gothic architecture replaced the predominant style with soaring spires and towering stained glass windows that bathed the interior in light. The near-Parisian Abbey of Saint-Denis personifies this gliding style; Abbot Suger rebuilt the abbey following the mystical principles of light. 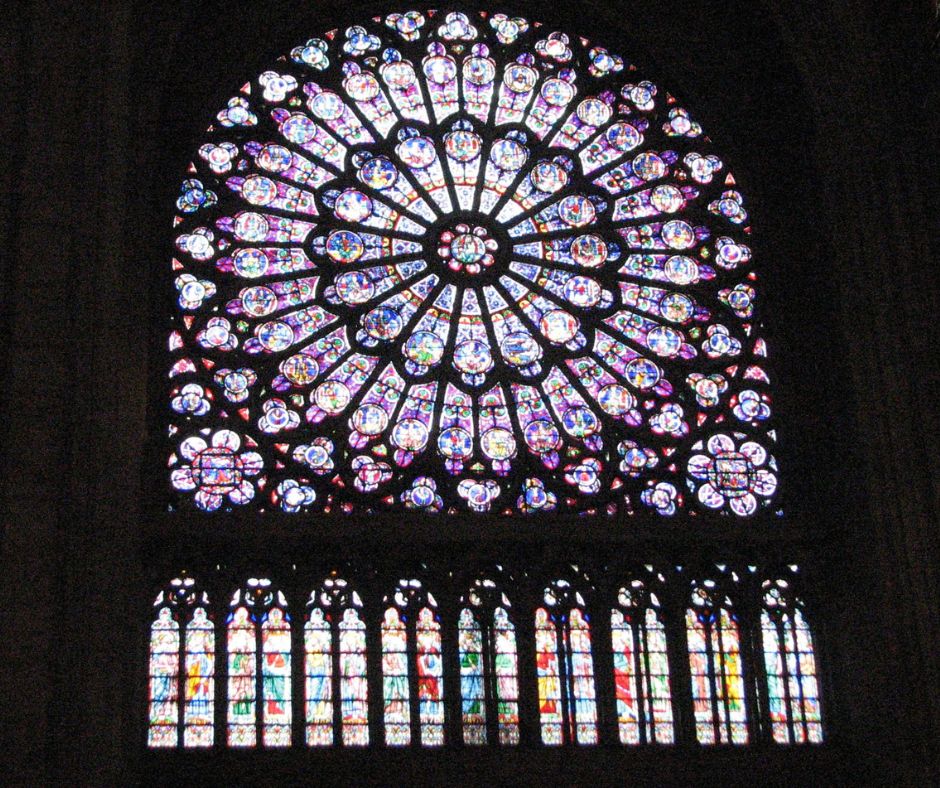 Stained glass adorned Islamic mosques and palaces across the Middle East by the 8th century reflecting the rich ornate styles of Islamic architecture. The Book of the Hidden Pearl, written by Persian chemist Jābir ibn Ḥayyān, is a colored glass recipe book written about the craft.

The Renaissance and Reformation eras saw a shift in both technique and subject in stained glass windows, a transformation that helps to date pieces salvaged from bygone days. The mosaic style bound by thick lead casings vanished. Also, artists painted enamel directly on the glass before it was fired. Stained glass windows became more common in secular buildings and the homes of nobles, and featured more humanlike and earthy scenes than the previous divine and biblical renderings.

The fall in popularity of stained glass up to the 19th century was mostly due to Protestant Reformation and Counter-reformation, movements allergic to elaborate decoration. Glass workshops centered in the Lorraine region of Europe vanished after many palaces and castles were razed to the ground during the war.

Stained glass windows came back into popularity in America during the Gothic Revival when church congregations called for a return of the leaded art form. The revival occurred in designs for churches across Europe, as well, and stained glass windows were often incorporated into designs to replace glass destroyed during World War II. A sort of new renaissance was born. 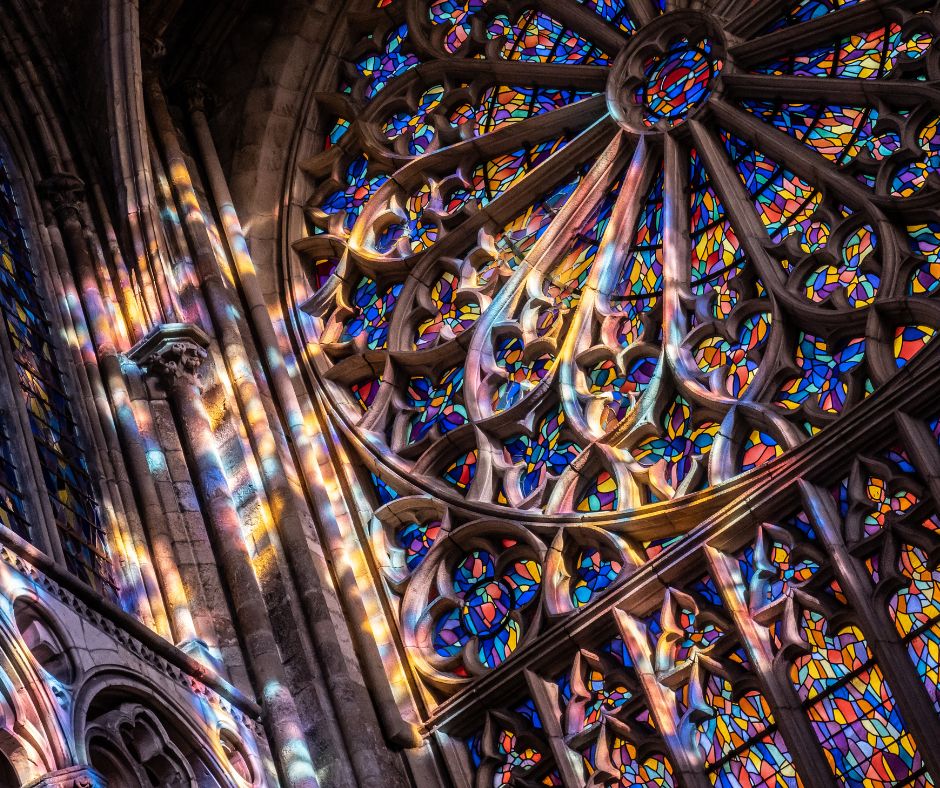 Stained glass artists also reimagined technique and design in less cosmopolitan parts of the world. In Australia and New Zealand, those wealthy enough began importing stained glass from England. A feature of stained glass made by natives was the native plants and wildlife used in the design, but the 1930s Depression brought destitution to the native studios.

In South Africa, artist Paul Blomkamp used resin bonding and thin glass due to the impracticality of obtaining the lead. Italian Swiss craftsman Claudio Pellandi set up a studio in Mexico for leaded glass, etching, beveling, and silvering mirrors. Famous artist Marc Chagall designed stained glass for the chapel of the Hadassah hospital in Jerusalem.

By the 1960s, small craftsmen could make stained glass due to the invention of a small furnace for craftspeople. Hot glass became a course in colleges and universities. Architect Frank Lloyd Wright’s “Prairie Style” philosophy of architecture incorporated stained glass windows featuring geometric designs and abstract shots of color juxtaposed into clear glass. 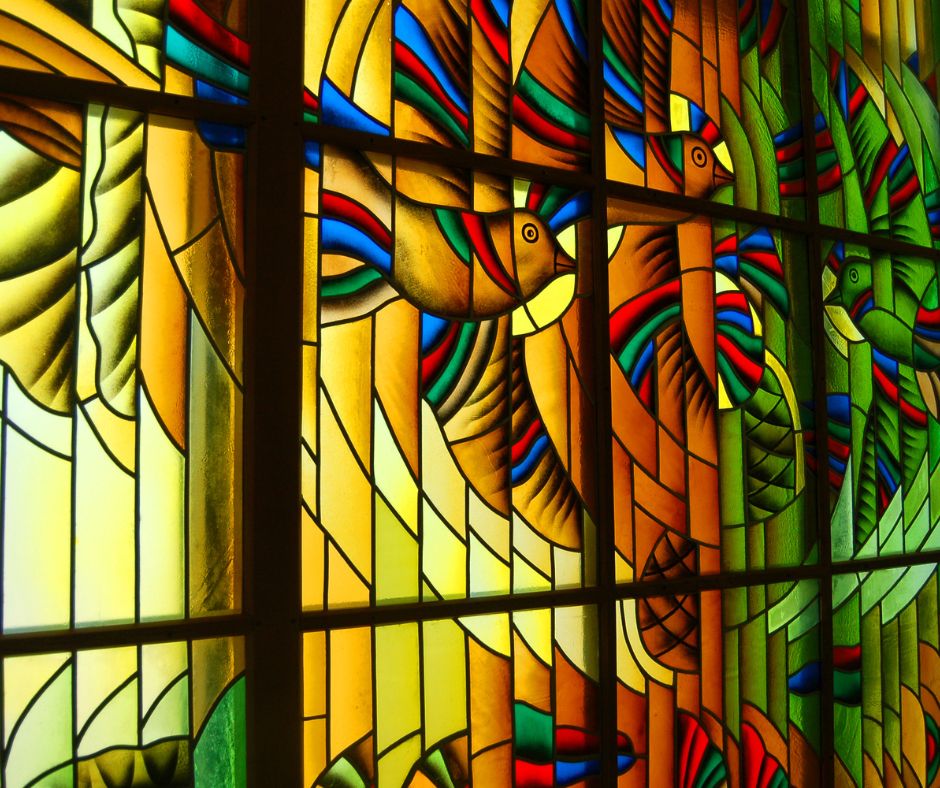 Ever an art form, whether imbibed with symbolism or not, stained glass retains its beauty and collectibility throughout the centuries, even as new forms and techniques of expression transform this medium of expression.

Olde Good Things houses a number of fine stained glass windows reclaimed from historic places such as the Waldorf Astoria NYC, as well as altered antiques composed of the glass from the famous Robert Sowers window at JFK Airport.

Now you can see a large grouping of JFK stained glass windows on our website. Most of them have minor problems but remain fully intact. The glass can be restored by a glass restorer. View all the windows currently for sale online. 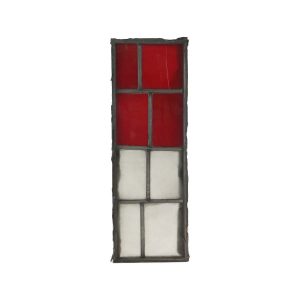 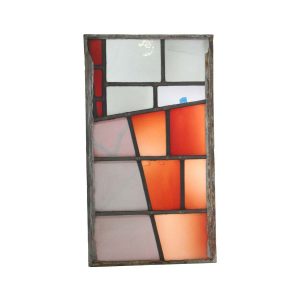 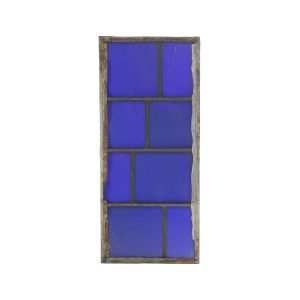 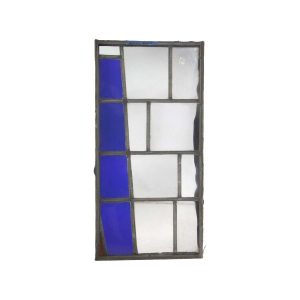 The architecturologists at Olde Good Things were able to carefully preserve a true landmark of history when they captured the famous stained glass window panels from JFK International Airport’s Terminal 8. The terminal, fondly known as “The Cathedral”, was demolished in 2008 to be replaced by a modern steel-and-glass structure next door. A discussion ensued over the preservation of the original stained glass window unveiled in 1960. The New York Times article can be viewed here.

The 317-foot by 23-foot translucent mosaic panel facade was designed by Robert Sowers, who is considered by some to be the most iconic stained glass artist of the Modern Age. The piece was composed of over 30,000 flash glass tiles in vibrant red, sapphire, and white. Sowers was one of the first artists to prominently feature stained glass in commercial architecture.

Here you see photos of a London Pub, The Old Queens Head, designed with many decorative sustainable items from architectural antique sources all over the world.  Riz Shaikh, owner and seasoned head designer of the Colombo Group with an eye for detail, envisioned a speakeasy design with warm sepia tones.  He sourced decorative ceramic tiles, wooden paneling and wainscoting, fireplace mantels, elegant chandeliers, and church stained glass windows. 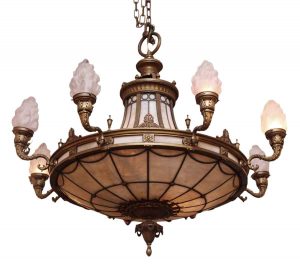 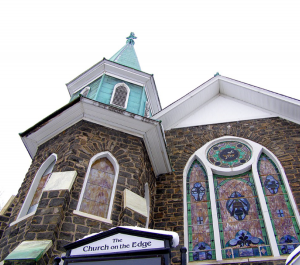 The Church on the Edge in Northern New Jersey.

He chose Olde Good Things for multiple huge 4 ft wide chandeliers and decorative slag stained glass to create the warm ambiance seen in these photos.  These multi-arm slag glass and bronze chandeliers once graced the banquet room of the famous Toy Center at 200 Fifth Avenue, which now houses the famous Italian market Eataly.  The ceiling and partition walls, as well as the decorative amber-toned stained glass which decorates the back bar, were reclaimed from a Presbyterian Church, The Church on the Edge, in Northern New Jersey.  The dark tone wood paneling adds warmth to his design. As seasoned designers know, the original patina is the key to its authenticity. 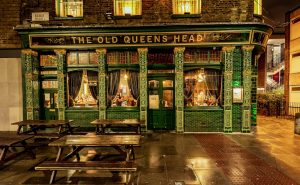 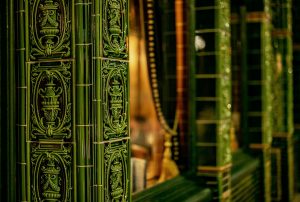 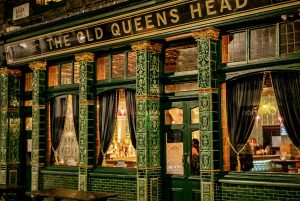 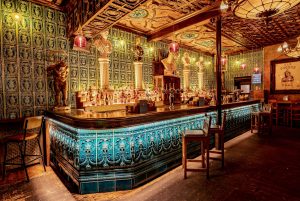 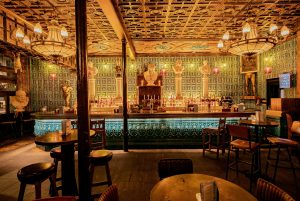 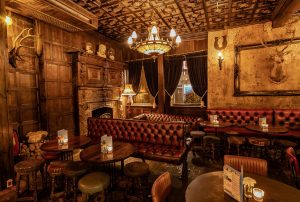 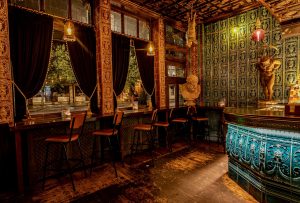 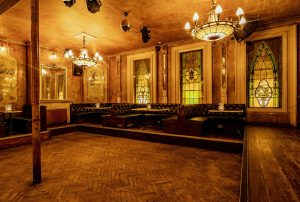 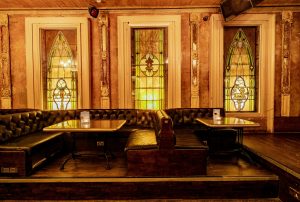 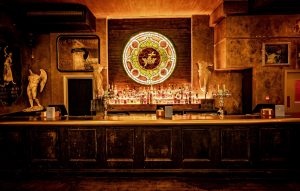 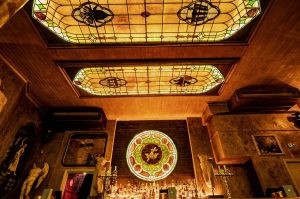 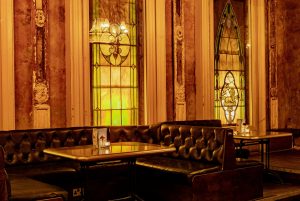 Our architecturologists are constantly seeking great finds like these chandeliers to make amazing statements in our customers’ creations. Only a fraction of these astounding treasures can be seen online, so feel free to call or visit our New York City and Los Angeles stores. You can also peruse our six-story department store warehouse in Scranton Pennsylvania, often referred to as a ‘candy store’ or ‘treasure trove’ for those with an eye for building with original antique architectural pieces in wood, marble, glass, and bronze.

If you wish to be featured as the next Customer Showcase, click here. 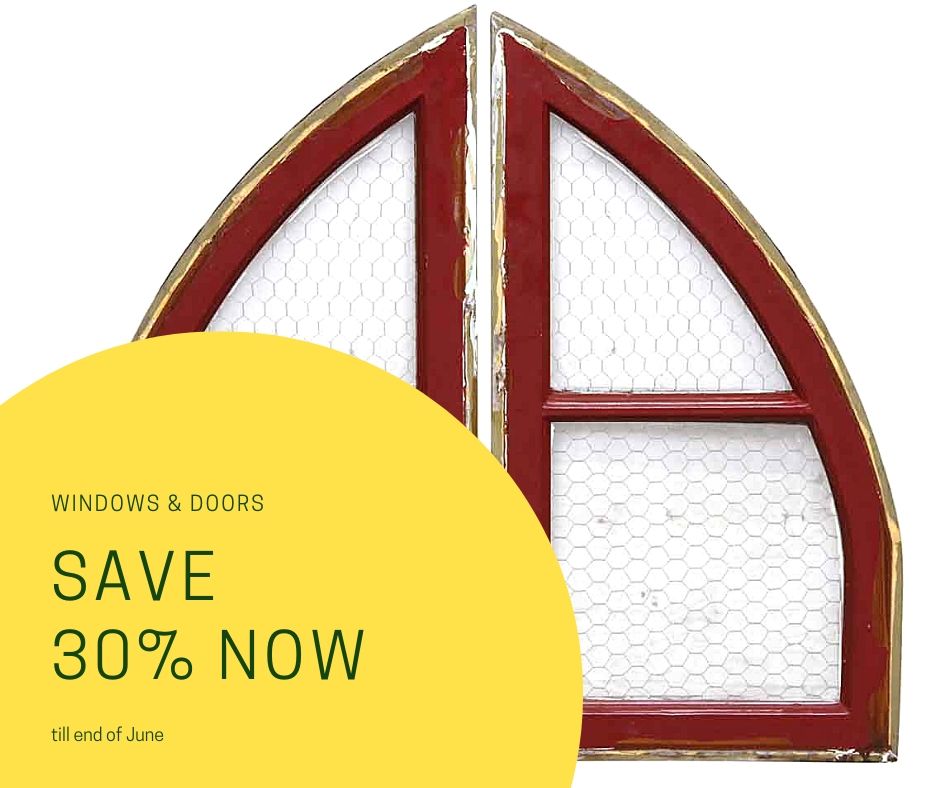 We need to open up space in our warehouse! This month we’re offering 30% off of our Reclaimed Windows and Doors (except Waldorf Astoria). So if you’ve been eyeing a chicken wire glass window or these gorgeous Art Deco interior French doors, now is the time to buy. All items in these categories (except Waldorf Astoria) are on sale until the end of June.

How will your olde good window or door get to you? We have several shipping and delivery options, depending on the item you purchase and where you live. While most doors and windows are crated and shipped as freight, some doors (without glass) can be shipped UPS Ground for a cheaper rate. Customers in easy driving distance from our main warehouses in Scranton can consider local pickup, while customers in the New York City, Washington DC, New England, Chicago, and Florida areas can ask us about delivery. We also send a container to California on a quarterly basis. Contact us for specific information and quotes for shipping or delivery to your location.

The door will soon close on this window of opportunity, so browse our inventory today! 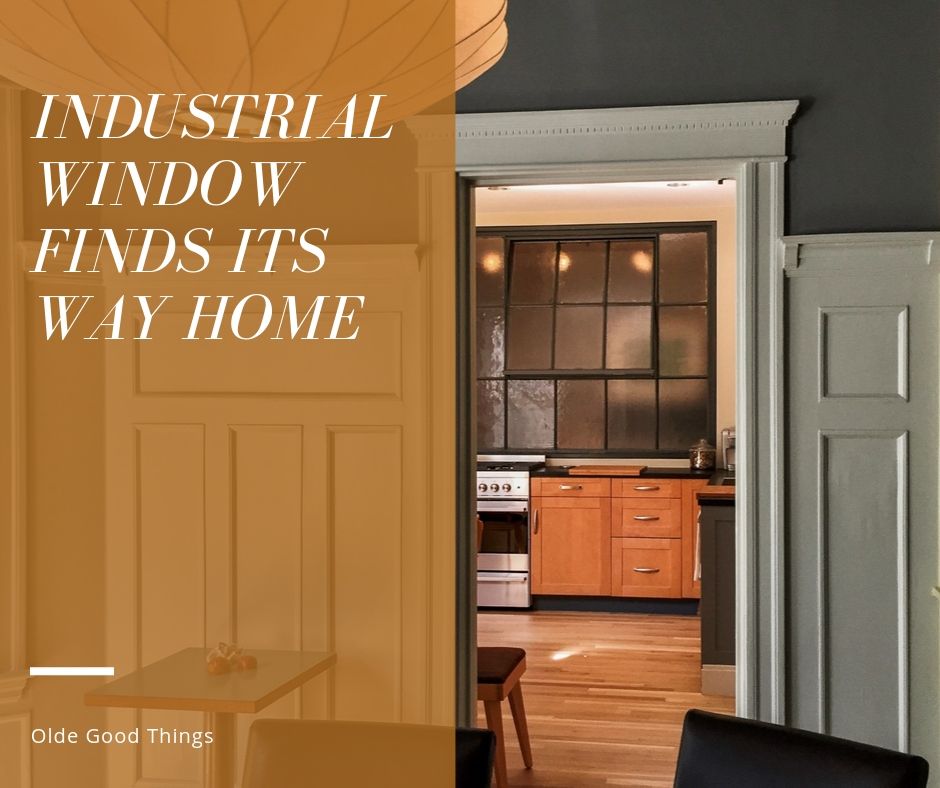 We love seeing how our customers put their Olde Good Things to use – especially when that use is creative and unexpected.

This 15-light steel window with pebbled glass was salvaged from a commercial building, and we imagined it finding new life in an industrial space. Customer Kris Rodammer, a creative director and brand design consultant in Boston, had a cozier image in mind – he installed it as an interior window between the kitchen and hallway in his Brookline home.

Interior windows brighten a space, and the pebbled glass in this particular window invites soft, textured light into the hallway while creating a feeling of openness in the kitchen. Six of the lights pivot on a center hinge, allowing control over the flow of sound and air by opening and closing the window. The clean lines are a perfect complement to the classic design of Rodammer’s home.

Feeling inspired? Shop our reclaimed industrial windows and bring home one of your own.

One of Olde Good Things most recent acquisitions is unusual aqua blue glass with twisted chicken wire salvaged from the Hamilton Manufacturing Co. in Two Rivers, Wisconsin.  This company was for decades the leading maker of printing equipment for newspapers, magazines, and small printing shops.  They had a prime mid-west Industrial Age factory with a grand foot print right in Two Rivers.  Seen in this picture is the facade of the building with three sections of these unique windows. 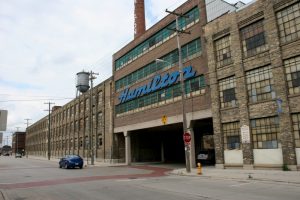 Industrial Chic is receiving increasing attention these days by designers everywhere.  And this vintage industrial wire glass in retro aqua color would give an added pop of color to your next design project.  Sold by the square foot and can be cut to your specifications.  Any questions, feel free to inquire at our special glass email:  [email protected] and we’ll get back to you with any information you may need.