A pair of 1940s hand carved marble statues of ministering angels were rescued by Olde Good Things from a massive sugar baron’s estate with a vibrant history. These angels are in excellent condition and were recovered from the sanctuary of a mansion that wears multiple faces – manor house, Divine Order, orphanage, and school. 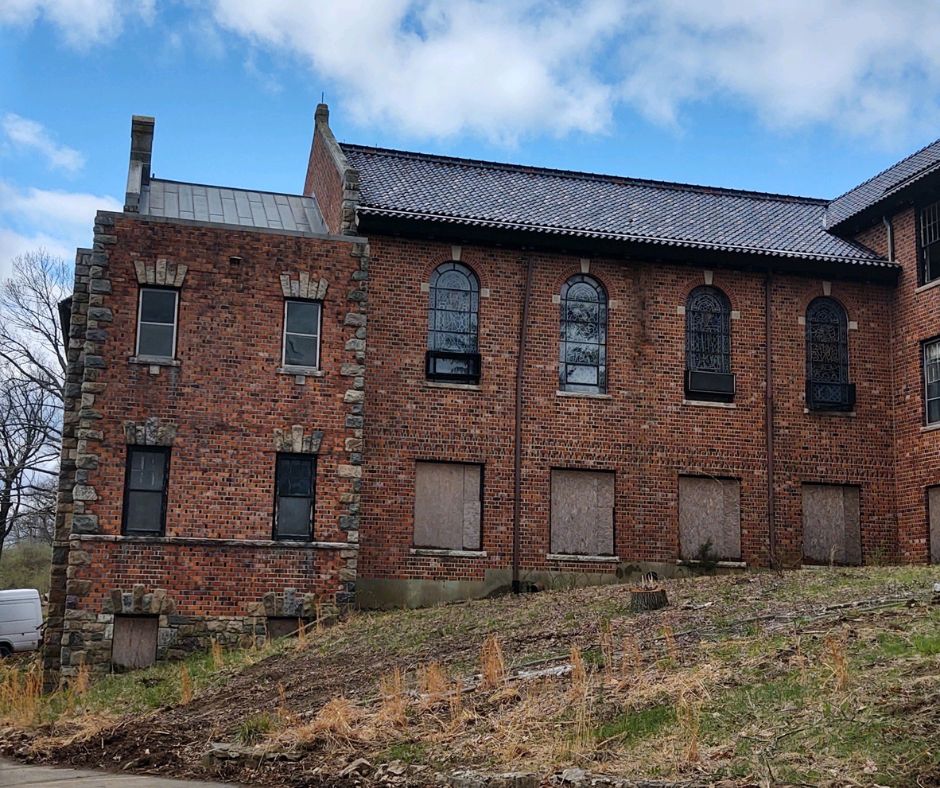 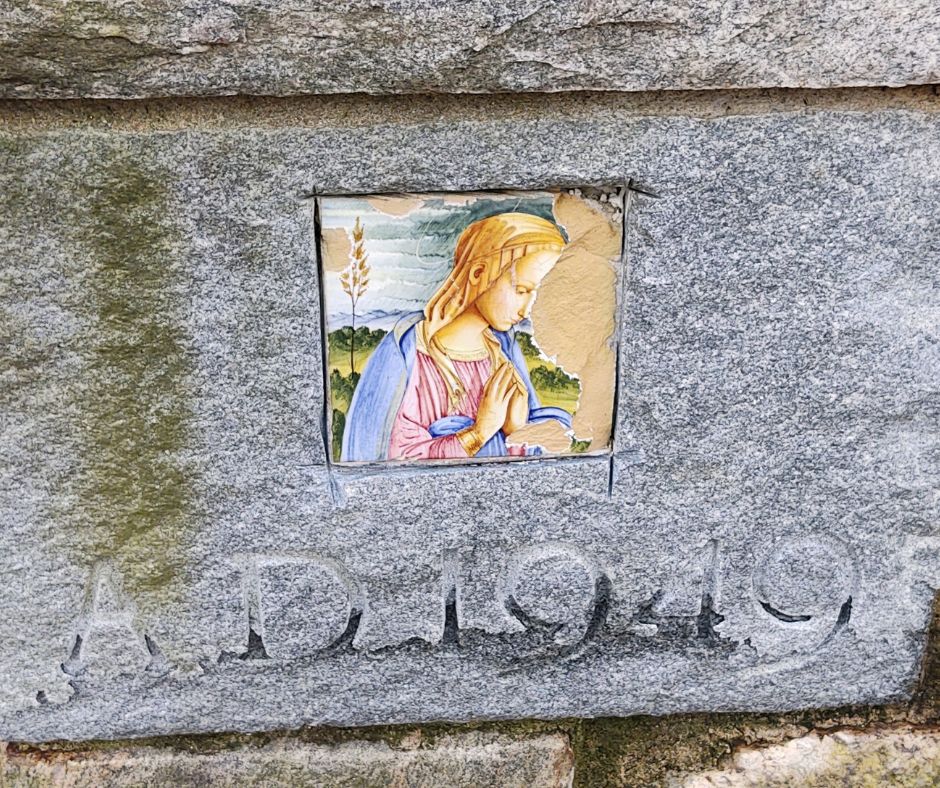 The story of the estate begins in 1906 with wealthy sugar importer George R Mosle. The sugar baron’s company, Mosle Brothers, was an agent and banker for Cuban sugar plantations prior to the Spanish-Cuban and Spanish-American wars. Mosle brought sugar-cane growers and their families to the US and paid to build up their plantations in a new country.

Mosle built an estate named Hillandale near the captains of industry in Far Hills, New Jersey. The sugar empire sprawled across 32 acres. A mansion fit for a sugar baron was invoked. Mosle’s mansion was designed by estate architect Grosvenor Atterbury. 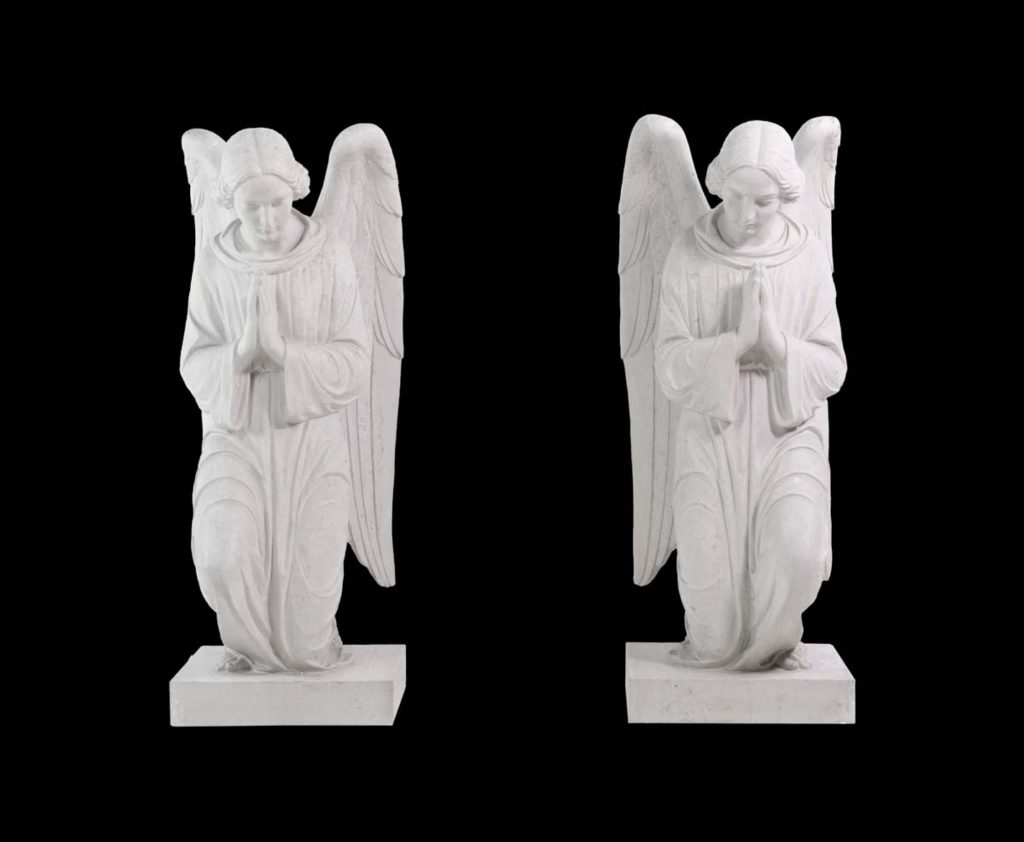 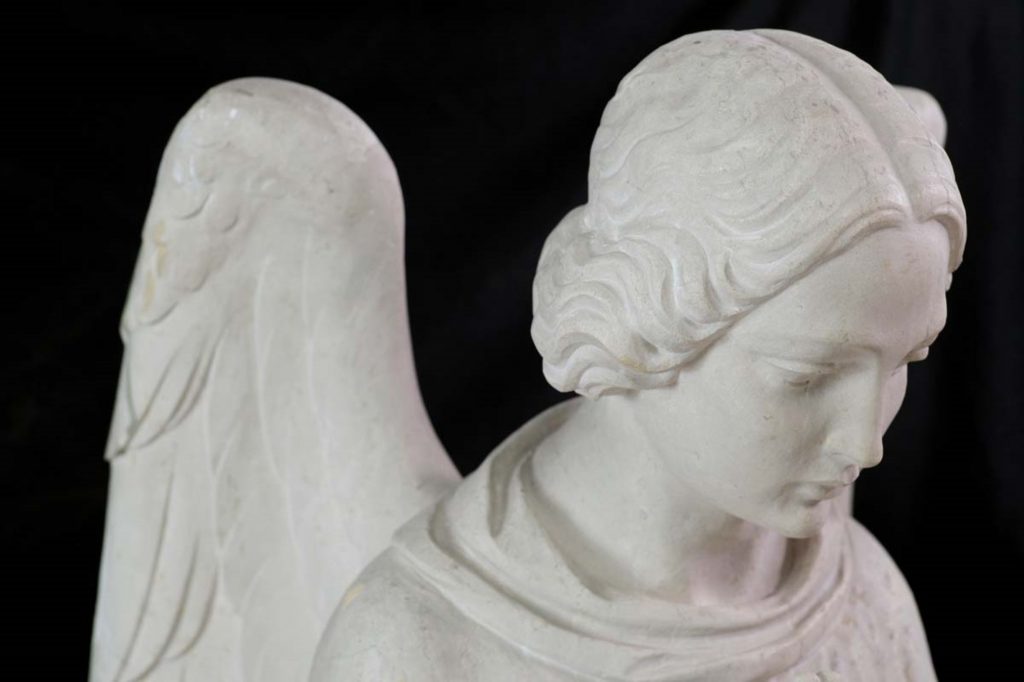 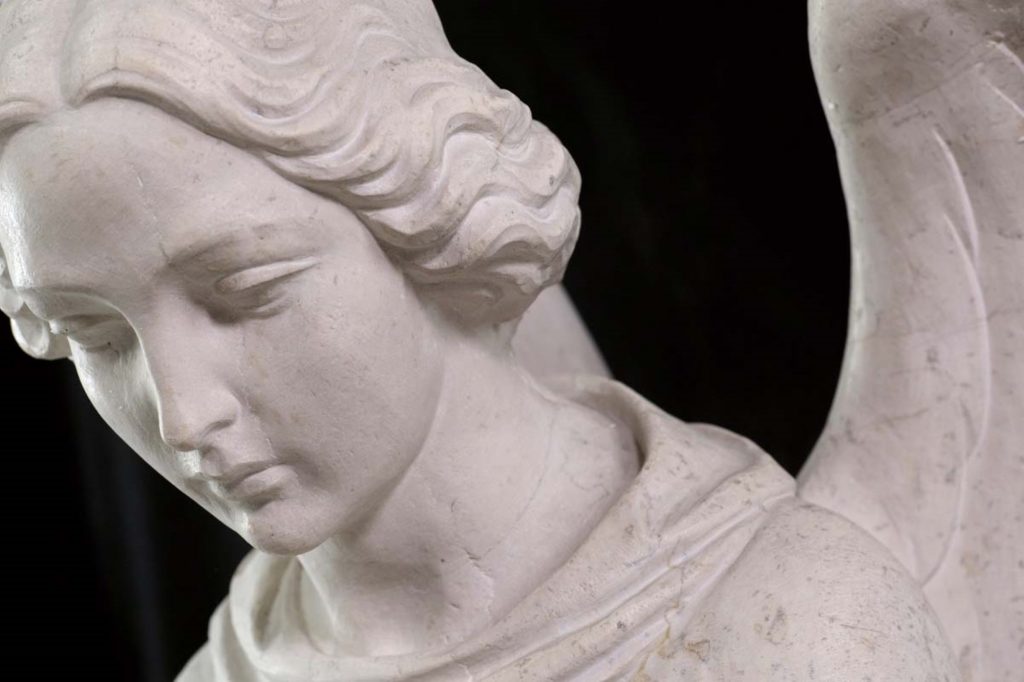 Atterbury was a noted regional architect, and his legacy is a bit offbeat. He designed both estates and urban buildings. Atterbury’s ongoing interest in urban design, housing, and social issues was a signature of his work. The architect continued to use the same luxury design on estates and structures for the working poor of New York City; he experimented with lowering the cost of materials by various means throughout his life.

The manor at Hillendale was 18,000 square feet of stone and brick, with soaring windows, fireplaces, wood, and terracotta tile. Original details of the mansion, which is on the market, include a wood-lined butler’s pantry and a grand stone patio.

According to the Historical Society of Somerset Hills, German submarines torpedoed many of Mosley’s ships during World War I. He was refused post-war retribution payment, forcing him into bankruptcy.

The grand estate was put up for auction and purchased by Sisters of St. John the Baptist in 1926. New use demanded new additions for the Mount Saint John Convent, which converted the estate into an orphanage.

Architectural relics often spin a tale that reflects the storyline of cultural heritage. Statues mounted to guard over human endeavors are a common thread that sews together architectural history from ancient times to the present, along with statuesque art that reflects the values or daily lives of a place’s inhabitants. 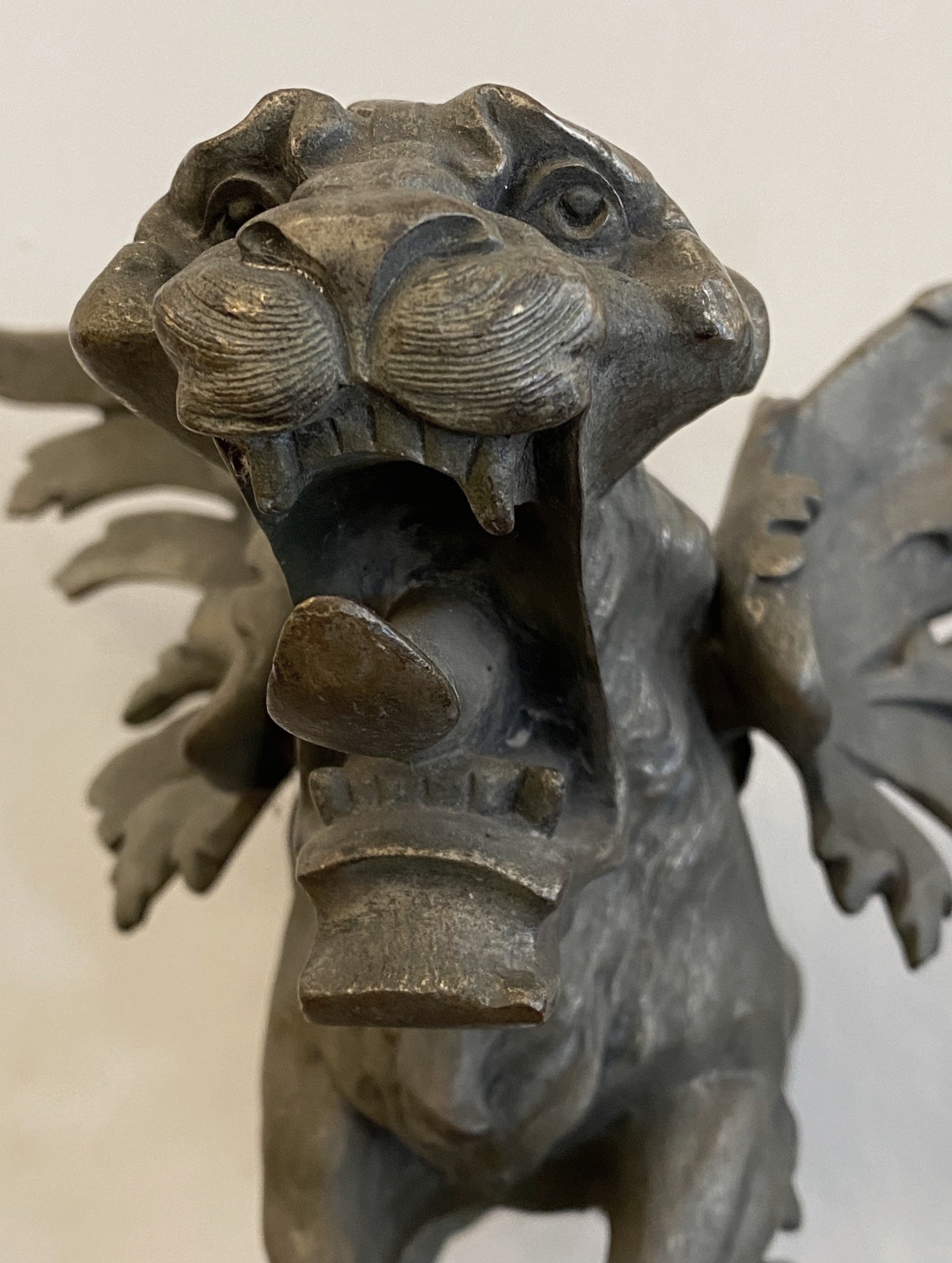 Mythological griffins are creatures with the body of a lion and the head and wings of an eagle. Griffins were guardians of secret wealth and morphed to become a heraldic symbol of nobility in architecture and on noble crests.

The earliest known griffins in architecture decorated palaces in the ancient Persian Empire, where they were seen as guardians of light. Lions and eagles were both common symbols that decorated the buildings that housed royalty, and the griffin is a combination of the qualities of both. 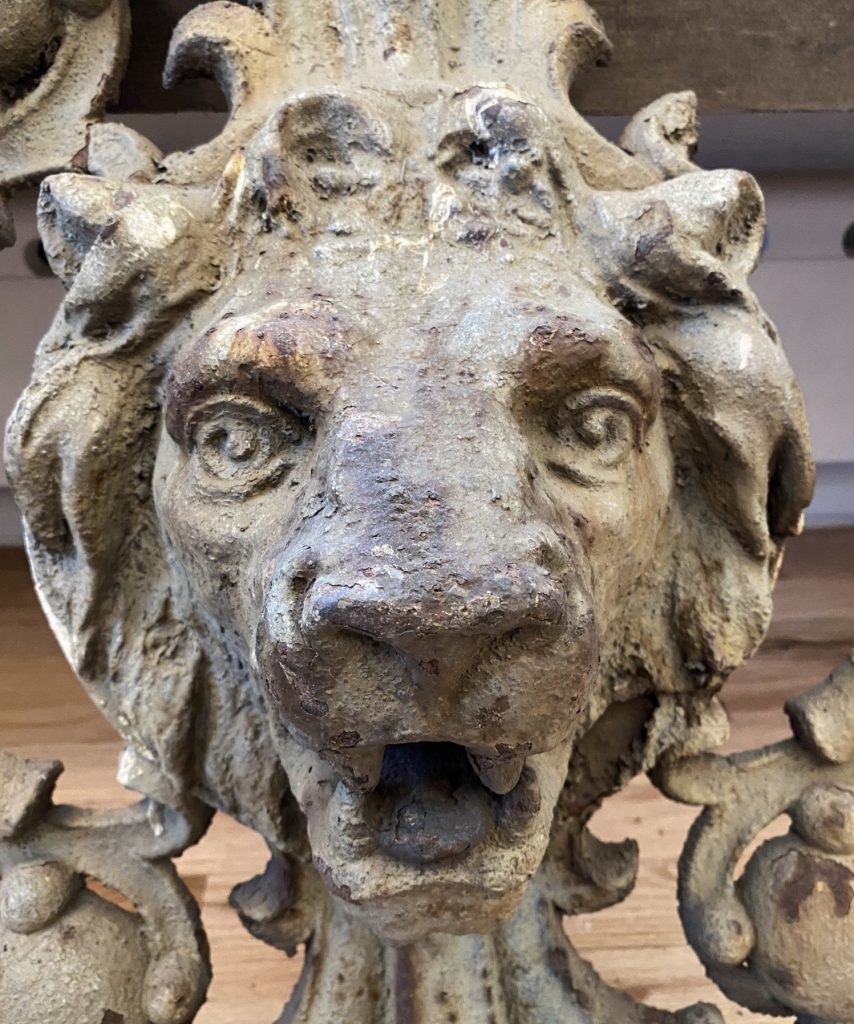 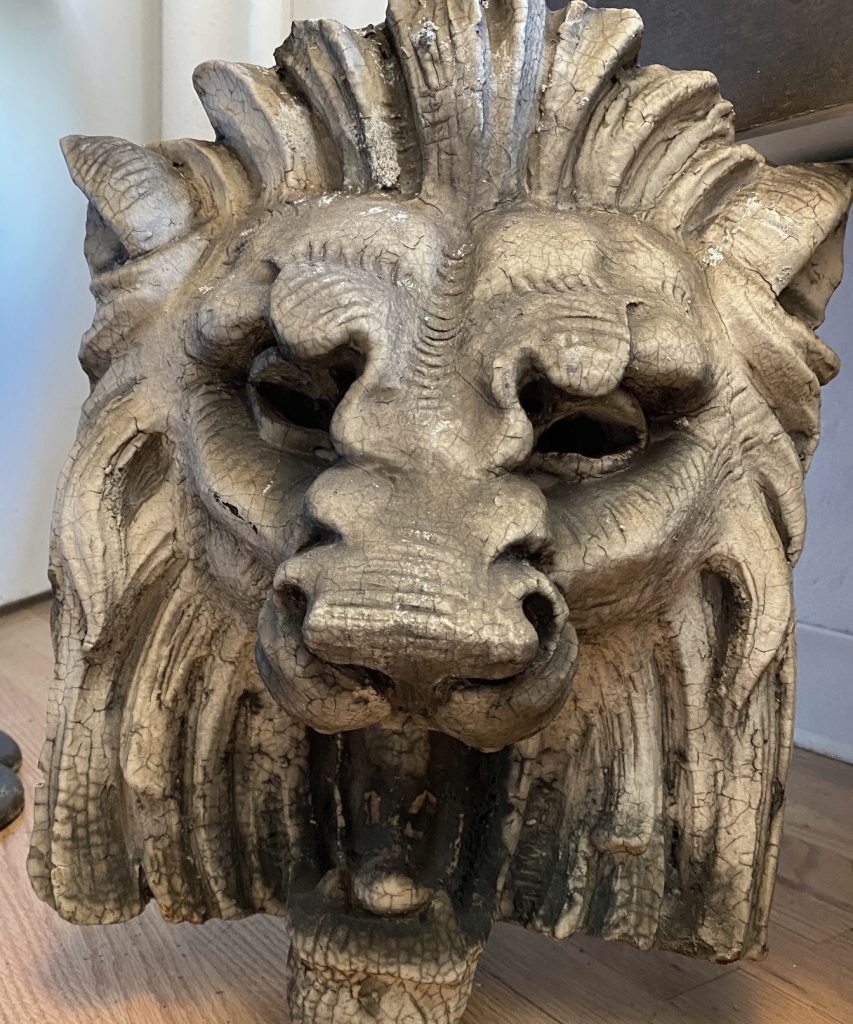 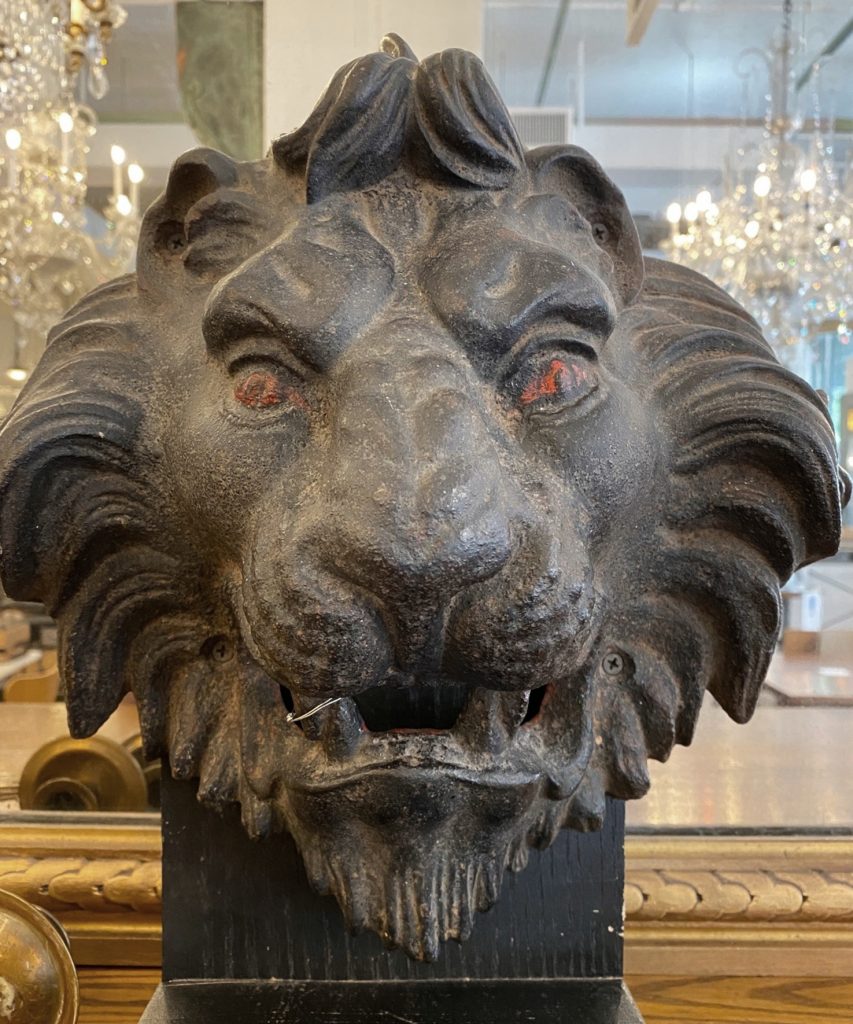 Lions have long been a symbol of royalty, nobility, and strength. They have been featured in art and architecture throughout world cultures.

In the US Capitol, depictions of lions can be found at the Grant Memorial, Senate fountain, Rayburn House office building, Capitol Business Center, and Thomas Jefferson building, to name a few.

But lions have been a symbol of power since the beginning of art and architecture. One of the earliest examples may be the carved mammoth ivory statue of a man with a lion’s head discovered in a cave in Germany.

From ancient Iran and Egypt to Trafalgar Square in London, statues of lions preside like kings over the constant river of humanity that flows by. 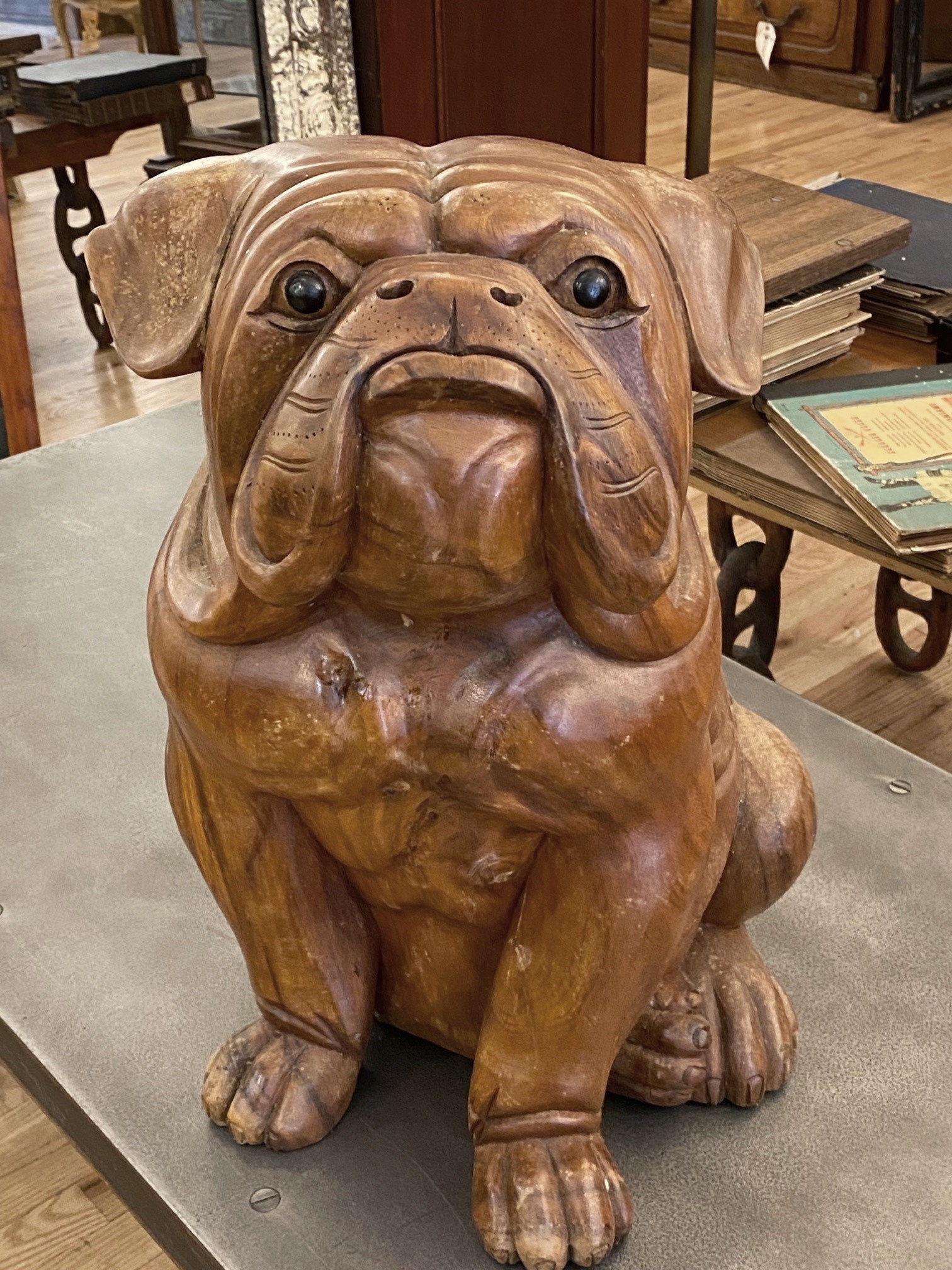 The bulldog is a somewhat controversial symbol of Britain. The dog in this carved statue is a British bulldog; the shape of the ears gives it away.

During the 1700s, fans of the banned sport of bullbaiting honored the bulldog as a symbol of courage and determination. The Old English Bulldog was muscular and stocky with a steel-trap jaw. In the 18th century, the breed is featured beside a lion and the female symbol of Britannia in many political cartoons. The bulldog became a widespread symbol of Britain during WWII when then Prime Minister Winston Churchill was called the “British Bulldog” for refusing to back down against the Nazi regime, and the bulldog became a symbol of fierce national loyalty and courage. 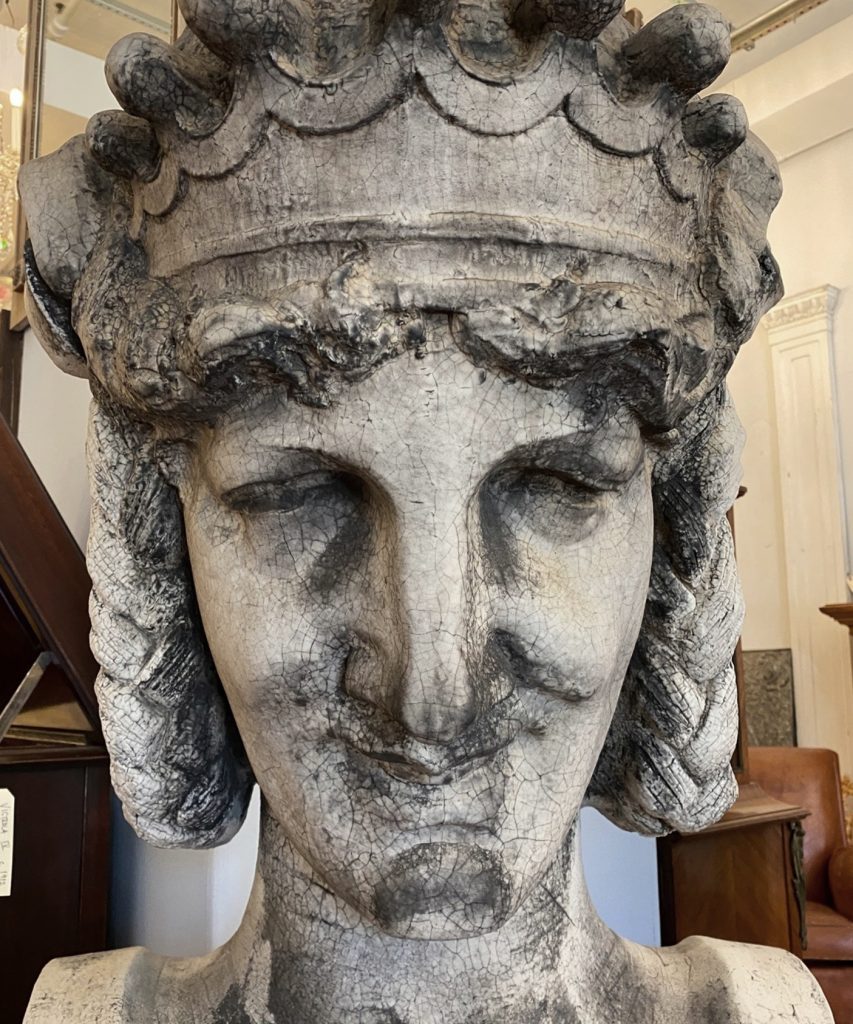 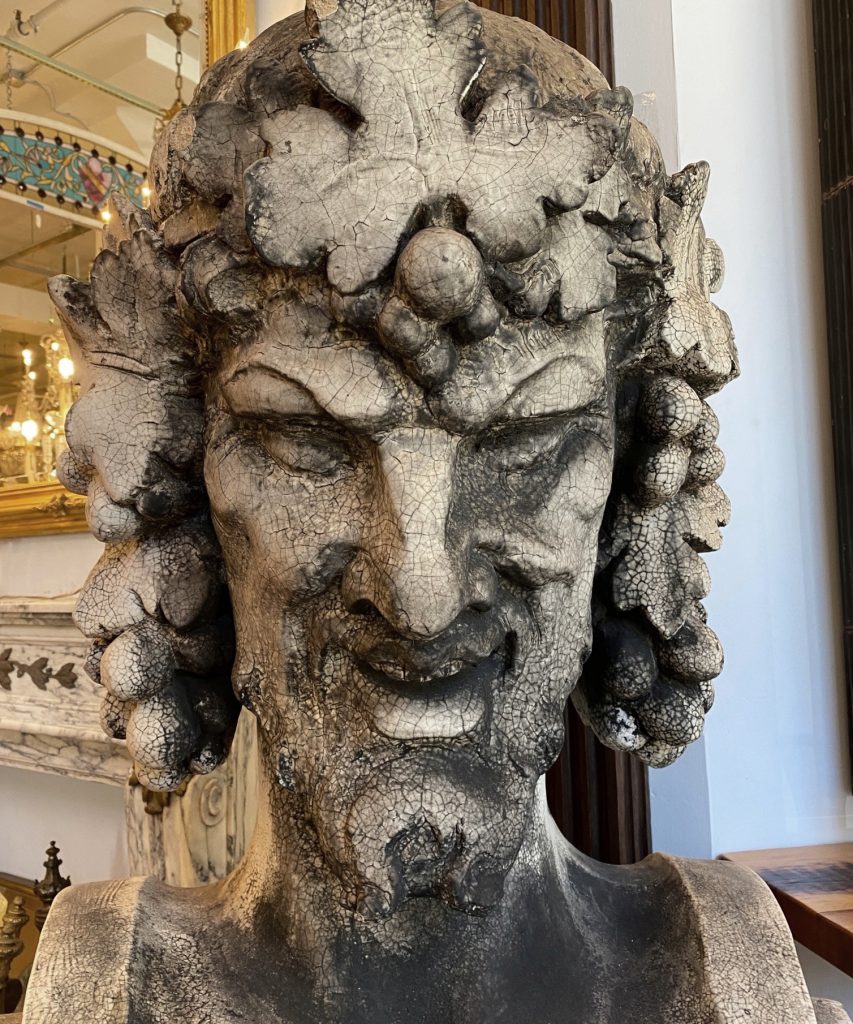 Architecture is one medium for bringing the stories of the mythological and legendary and preserving these stories for thousands of years. The gods, goddesses, heroes, and creatures of a culture’s mythology were incorporated into architecture and statues to summon their qualities to a place — state buildings, temples, pyramids, and the estates of the wealthy all tell these stories.

Bacchus, the Greek-turned-Roman god of wine and frivolity, along with his wife Ariadne, is shown in this collection of architectural salvage at Olde Good Things. 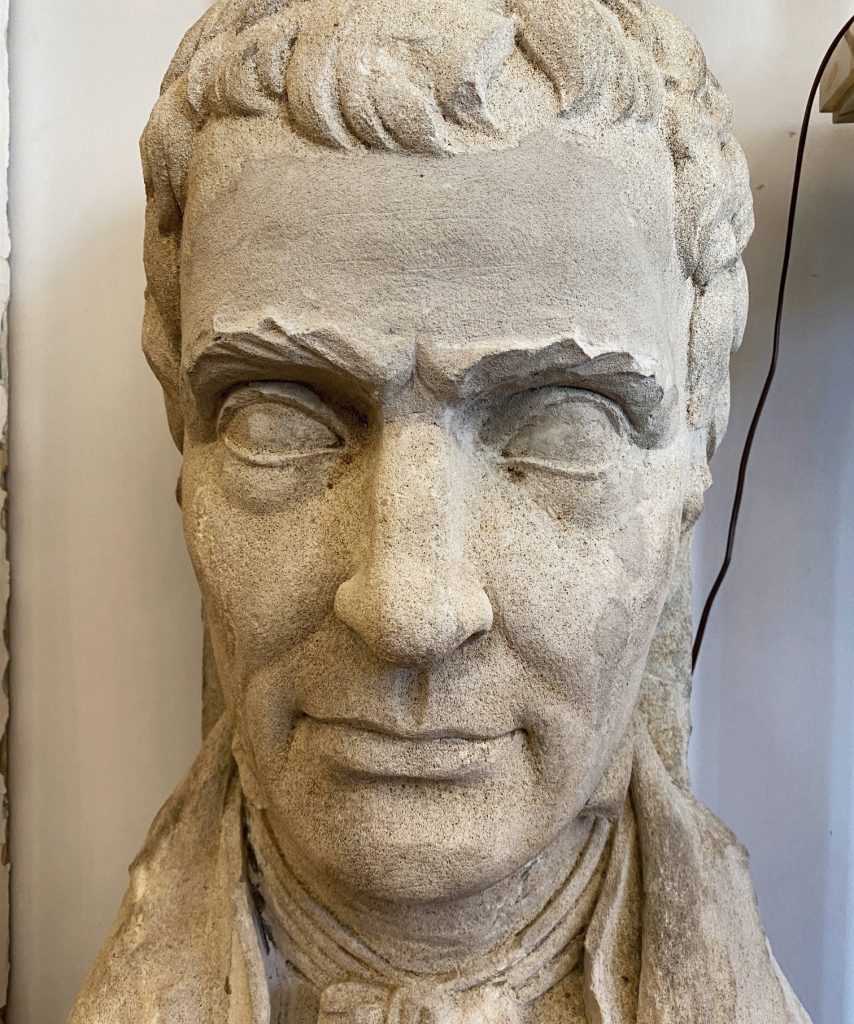 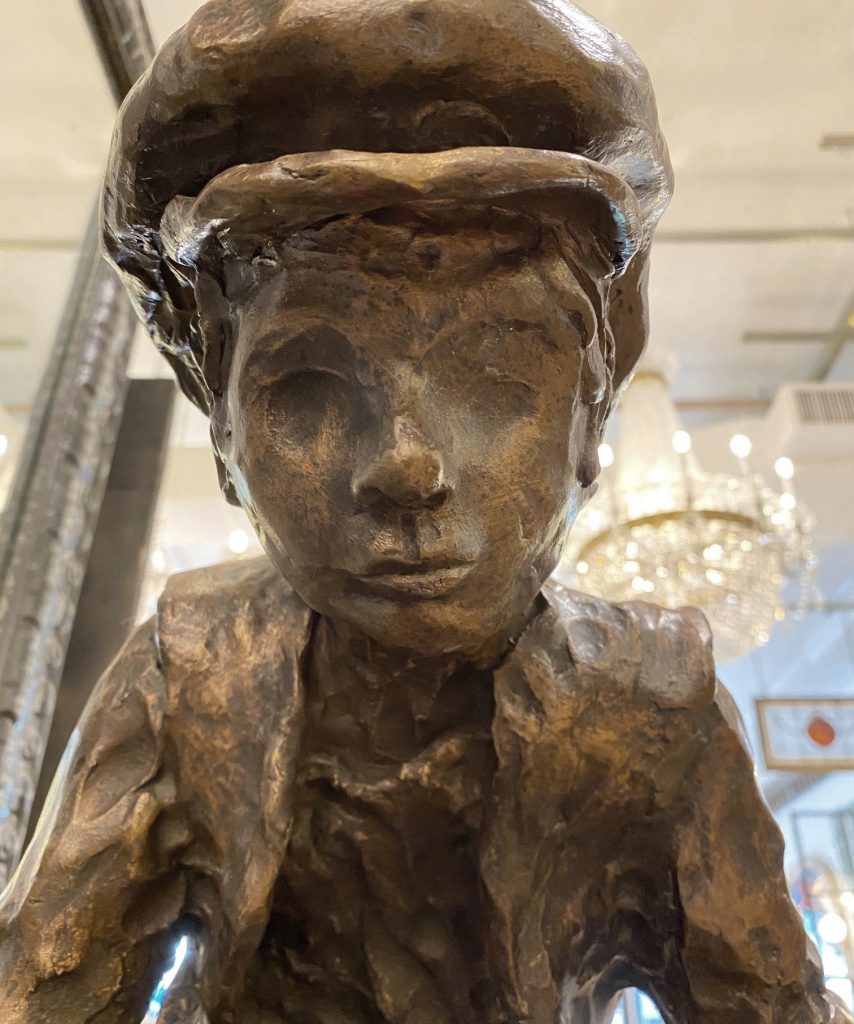 Other pieces are a tribute to the human components of culture, like this bust of American inventor and engineer Robert Fulton, or this statue of a boy shooting marbles.

For more faces of history and other architectural salvage finds, visit one of our locations or contact us at Olde Good Things.

Madison Ave has long been synonymous with high fashion, boutique stores, and all the amazing designer items you could possibly imagine. We at Olde Good Things are super proud of our Madison Ave store and the name it’s making for itself in the city and the community. There are hundreds of salvaged, repurposed, and restored items on display in our store, but the one thing that seems to keep grabbing our customers’ attention is the lion that greets them as they arrive. 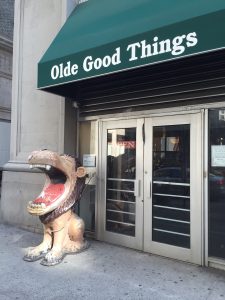 This lion, a vintage, beautiful salvaged amusement park fountain piece from years ago, is the unofficial mascot of OGT, but that doesn’t stop people from asking how much he costs, or where they could pick up their own lion.

Some who stop to see the lion can’t help but take selfies, snap quick pictures, or share a tale about how our lions remind them of someplace or some wonderful memory from their childhood. We couldn’t be more proud of our lion, the amazing positive emotions he evokes, and the delightful buzz he brings to our stores.

If you’ve visited our Madison Ave store, you may have met our lion, or if you’ve seen our truck making the rounds in the city, you might have caught a glimpse of his twin brother who makes a permanent roaring statement from the back of our open-back truck. 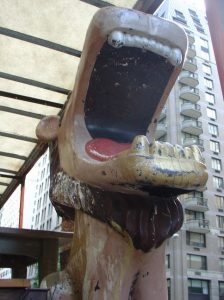 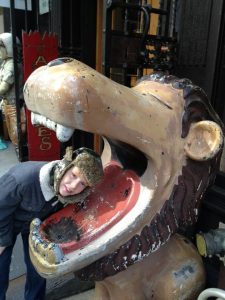 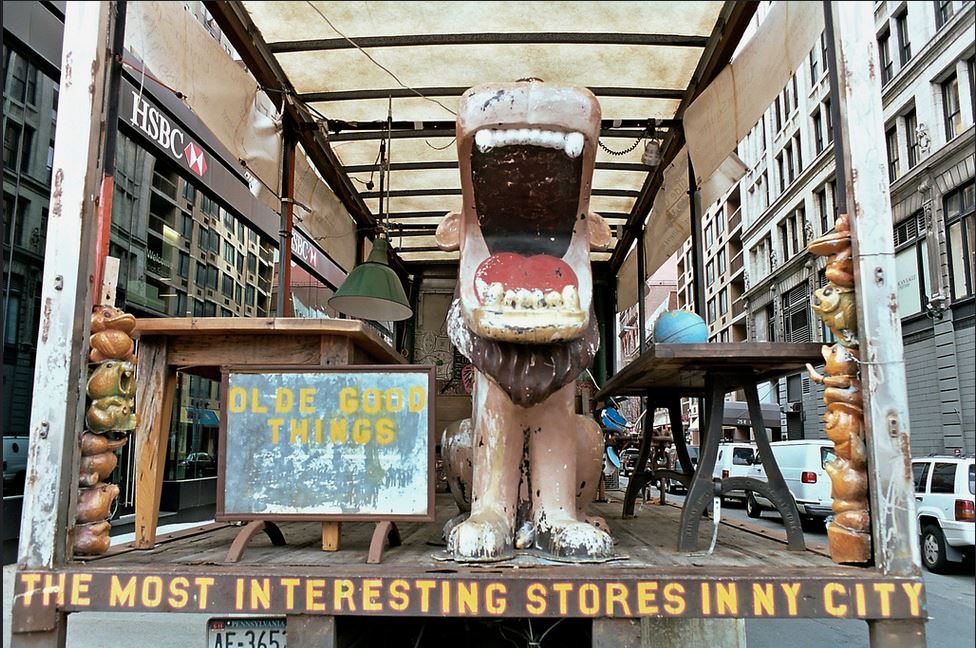 Do you have questions about our lion? Please ask. We’d really enjoy providing any information you need. We are also eager to show you a few hundred of the other items we’ve salvaged over the years, and the hundreds of thousands of items we have in our ever expanding inventory. If we don’t have it in our Madison Ave store, you may be able to find it at one of our other locations.

Do you have a precious childhood memory our lions brought to mind? Please share in the comments section below. We love hearing from our customers, and we love hearing from those who’ve been inspired or impressed by our items—including our mascots.

If you like our lions, you’ll love our other figural items. Here are a few conversation pieces you’ll find on sale:

Below you find one of the latest additions to our lion family.  This highly detailed center lion with swag motif three piece sandstone set from Time Square NYC.  Small quantity available.  Isn’t he a friendly looking character?

This lifesize fiberglass lion isn’t as vocal as his Madison Ave cousin, but he has his own beauty and special features. He’s perfect for a garden setting, or a conversation piece outside of your own store. 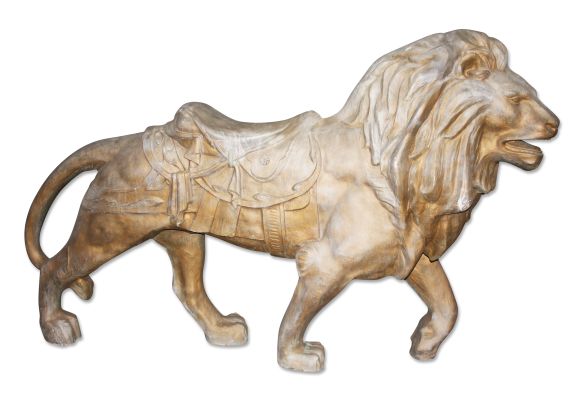 These gorgeous limestone, art deco mountain lion statutes are the perfect pair. They will liven up your outdoor spaces or can serve as a greeting (or warning) to guests from your front porch. No matter what, you’ll find these amazing big cats will start a conversation. 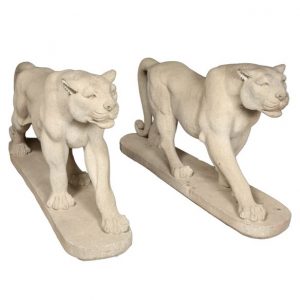 To learn more about these items, please contact us. We’d love to hear from you!