In 2008 we were privileged to acquire 200 marble mantels from the Plaza hotel in New York. Designing luxurious rooms for glamorous clients, the stone was hand-selected, sent to Italy where it was carved, chiseled and polished into a sheen. Intricate attention and skill was applied, resulting in nothing short of art.

The Plaza Hotel closed its doors in 2005 and went under a massive renovation in which we had the opportunity to salvage these pieces. Since then, we have less than half of what was originally acquired. Here is a favorite of what remains… 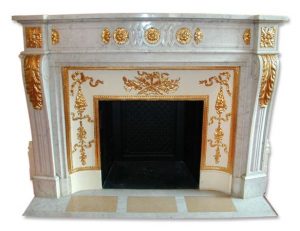 This hand carved piece is decorated with bronze gilded ormolu is sold.

Following The Plaza, in late 2010 Old Good things bought the entire inventory of Danny Alessandro & Edwin Jackson mantel company, the second oldest mantel dealer in New York City. There we found gorgeous hand-chiseled marble mantels, as well as replicas of mantels, andirons and tool sets. Available both in-store and online, below is a piece recovered from the early French Regency… 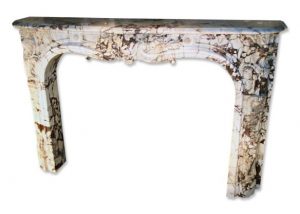 Here we see the style of the 18th century in the hand chiseled design of the center frieze as well as the way the leg motifs curve out. The marble is a soft white, contrasted with gorgeous eggplant and oxblood veining. A true work of art, the frieze is a foot deep and the marble extends down to the legs. Captivated? Sorry it’s sold as well.

The search never stops. Just last week we recovered marble mantels from a brownstone on the Upper West Side. The week before, we acquired more from a private residence in central New Jersey and another from Columbus, Ohio. Here is one of our most recent finds…

An intricately carved Baroque piece, it is made of Duquesa Rosa marble and is most likely from the Provence de Guipuzcoa, Spain. Find more here.

Hand-worked stone, marble mantles are more than a glorified shelf for cocktails and picture frames. They are the frame to your fire; a timeless piece of sculpture for your home.