Olde Good Things is a company well known for finding antique treasures, reclaiming, restoring or re-purposing their finds, and offers it to the general public to add to their own personal collection. These finds are from primarily New York metropolitan buildings that are to be demolished and would otherwise go to a landfill where it would be covered with unwanted refuse. There is so much that can be said for walking into a stately building built in a different era and seeing what they had found beautiful. Olde Good Things sees the beauty in the old, revitalizes the piece, and showcases it to people who are looking for a touch of elegance, whimsy, and unique.

One such architectural gem that has been reclaimed by Olde Good things are these stately heavy cast iron light posts that were created during the beautiful Beaux Arts movement by New York’s own J.L. Mott Iron Works. These magnificent light posts stand 15 feet tall and were found in front of an old warehouse in Brooklyn, NY. These monumental lights have neoclassical features that were popular during the last part of 1800s up until the Great Depression in the late 1920s.

These ornate heavy cast iron light posts features Greco-Roman column elements with ornamental bases that create an elegant, yet eclectic neoclassical design. Several banks, museums, and government buildings which were made during the Beaux Arts movement in the United States featured such amazing lighting choices that were later thought to be ostentatious. Having a monumental piece from a bygone era would lend a touch of classical ambiance to old and new structures. With such historical and architectural significance, it is a true New York diamond in the rough. These cast iron marvels are currently at the Scranton, PA location where they are awaiting a new home. 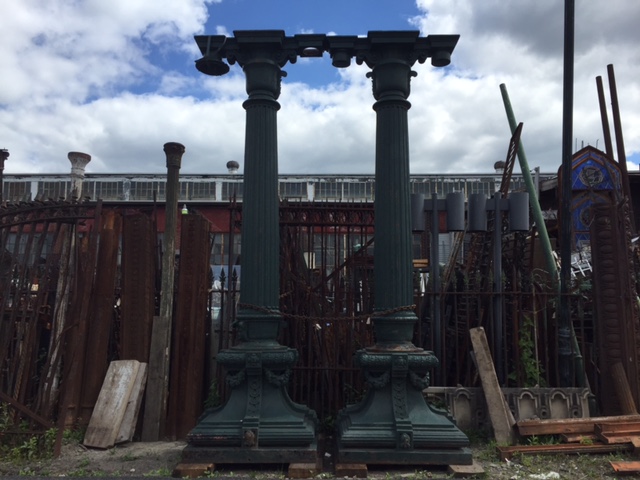