Chandeliers are one item that originated in high status and one which has consistently remained so throughout its development. Humans have typically reserved their best—and, in the case of chandeliers, brightest—resources for their places of worship. Churches and abbeys were one of the few areas where large crowds of people were able to go at the same time and unite for a common purpose. The clergy and the structures themselves were revered by the people and typically well cared for. This is where the first recorded uses of these innovative light fixtures developed back in the fourteenth century. 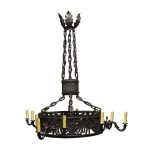 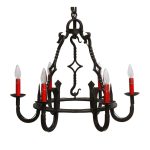 Having derived its name from a French word that means candle holder, the earliest chandeliers hung in churches and literally held candles with drip pans. The relatively simple designs were made of wood and shaped as crosses to serve practical functions: to provide light for as much of the inside of the church as possible at one time and reduce the possibility of fire from low lying, lit candles among large groups of moving people. The chandeliers were attached to the ceiling of other large spaces where crowds gathered, also, such as meeting halls.

The cost of the light fixtures was inhibitive even then, with only the common areas that benefited from crowdfunding and rich citizens able to afford to use the larger ones. Some households of modest means may have owned small versions of the wooden lights, with simpler designs and fewer candles ( seen below). It took no time for chandeliers to become the wealth status symbols they remain today, with castles commissioning the most elaborate fixtures for display.

18th-century glass chandeliers were produced by Bohemians and Venetian glassmakers. French leader, Louis XIV, ordered sumptuous chandeliers to adorn his castle and chandeliers became all the rage for the wealthy elite. During the Victorian Era, chandeliers dictated a social order for the aristocracy. The detail of the design, what they were made of, and the size determined how much clout a person had. Queen Victoria sent the heaviest chandelier known, to a fellow royal in Instanbul. This magnificent structure weighs just over four tons and holds 750 light spaces. A gift of a chandelier this substantial spoke of the Queens’ immense power and highest social status. The receiver of her gift must also have been in the top area of the royal ranks. This chandelier is still known as the largest Bohemian crystal chandelier in the world today, pictured below in Dolmabahce, Istanbul.

Chandeliers were then made of various other materials, metal being the most common choice, although crystal embellishments soon took over a great part of the design.  The technology of glass production helped to develop crystal details for chandeliers. By the time the 1800s rolled around and gas was used in producing light, chandeliers were customized to accommodate the changes. However, once electricity began in the 1890s to be used for general lighting needs, chandeliers were no longer necessary for light but held steady as home décor. 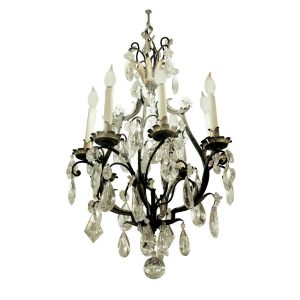 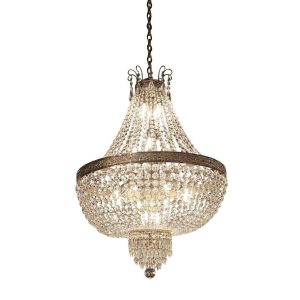 Today, chandeliers still reign from up high as one of the most innovative ways to show household wealth and taste. Even though chandeliers have been somewhat losing to history; pushed aside by bolder, more industrial lighting options, the architect-urologists at Olde Good Things have gone out of their way to hunt down, salvage, and reuse vintage and antique chandeliers in 21st-century homes. The chandeliers in stock at our warehouses are made of almost any type of material, such as brass, bronze, glass, crystal, & iron.

We recently acquired a unique collection of chandeliers from Waldorf Astoria in New York City. The Waldorf Astoria opened its doors in 1931 and in the 1980s went under extensive renovation. So the collection is a mix of styles from the whole century. You have to see it to believe it. 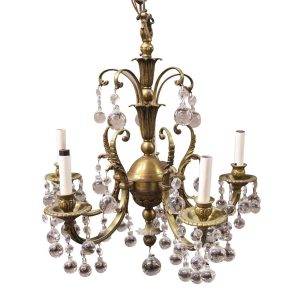 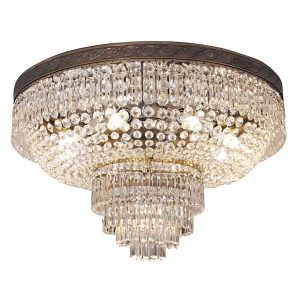