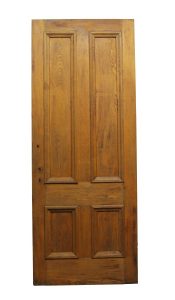 Known as “redwoods of the East”, American chestnut trees once grew in profusion to the tune of three to four billion trees in eastern US hardwood forests. Chestnut trees grew quickly and reached 100-feet-tall in canopies stretching along the eastern US. Their longevity was legendary; a chestnut could live three to four centuries.

Chestnut wood was a daily fact of life in America’s early history. It was used in timber for log cabins and barns, pianos, and fine furniture. The grained, blond wood was durable, rot-resistant, and pliable. Chestnuts resprout from the stump to reach a diameter of two or more feet in around 50 years, compared to the several centuries it takes an oak to grow the same amount.

Today, the American chestnut tree is technically extinct, according to the American Chestnut Foundation. Finding a mature chestnut in the wild is considered rare, thereby making the wood rare. What happened?

By the 1950s, the American chestnut tree was reduced to shrubs by a blight that began as early as the 1890s. The blight was caused by a fungus imported from Asia that spread easily, as spores attached to bird feathers, animal fur, and was tracked around by footsteps and even storms. The blight is still alive in the wild. Infected trees remain saplings; they never mature enough to flower and seed.

The loss of the chestnut tree was considered an economical calamity, one that scientists are still trying to remedy through various trial and error methods, such as hybridization. This unfortunate timeline makes the chestnut wood reclaimed from old buildings and furnishings very rare. It is a sad story, especially considering the misfortune of the chestnut trees and the loss of such a rarified wood. Nevertheless, when preserved through proper rescue, chestnut wood is a beautiful and durable reclaimed material with its own story to tell.

Contact Olde Good Things to appreciate these fine, exclusive chestnut paneled doors before the lot disappears. Prized for their durability and resilience, the chestnut wood doors are a great find. The actual door finish is a few tones darker than shown in the images. The light varnish is easily removable for restoration. Price is per door. Contact us for more information.